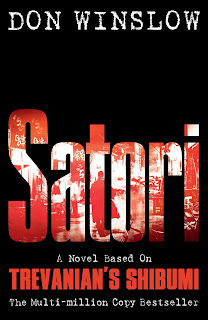 A gripping thriller that follows assassin Nicholai Hel across Asia as he fights to regain his freedom.

Sugamo Prison, Japan, October 1951. Twenty-six year-old Nicholai Hel has spent the last three years in solitary confinement for the murder of his mentor. A formidable assassin, linguist and scholar, as well as a master of hoda korosu or naked kill , he has developed a supreme awareness of the presence of danger. Suddenly offered the chance of freedom, he feels it now as never before...

Overseen by Haverford, his American spymaster, and the beautiful and mysterious Solange he must go to Beijing and kill the Soviet Union's commissioner to China. In a landscape primed for war this is a suicide mission he has no choice but to accept.

Can Hel succeed in winning his freedom and if so, at what cost? And can he ever achieve his ultimate goal of satori the possibility of true understanding and harmony with the world?

From the glittering corruption of Beijing to the darkest shadows of the Vietnam jungle, his mission will sweep him through a world of chaos, violence and imminent betrayal. For in those shadows lurks a formidable adversary known only as The Cobra, who strikes without warning and kills without mercy.

Trevanian was the pen name of Dr Rodney William Whitaker. He wrote several classic international bestsellers, including SHIBUMI and THE EIGER SANCTION. He died in 2005.

Don Winslow is the award-winning author of several novels, including THE POWER OF THE DOG and THE DEATH AND LIFE OF BOBBY Z. He has been a private investigator, an actor, director, movie theatre manager and safari guide. Born in New York he currently lives in the San Diego area with his family.

Aparantely Satori, is a prequel to a best selling novel, Shibumi by an author known as Trevanian. Trevanian created a character known as Nicholai Hel, master of a technique knowns as hoda korusu. This character speaks six languages, is a master of the game Go, and has a special proximity sense - the ability to detect when any person or thing is nearby.

Satori is set in 1951 with the Korean war in full swing and the Americans have had Nicholai in solitary confinement for three years for the honor killing of his beloved stepfather, General Kishikawa. Kishikawa, sentenced to a public execution, loved and raised Nicholai, teaching him how to play the game Go. To save the public disgrace, Nicolai kills Kishikawa.

Having set the scene we see Hel given an offer of being released from imprisonment (for killing his mentor) by his American spymaster, if he will accept the mission to track and kill, Voroshenin, the Soviet Union’s commissioner to China.

Through its many countries, cultures and the constant name changes as Hel attempts to remain under the radar of various authorities and those who seek to kill him. The nature of this assassin driven book reminded me of Ludlum’s Jason Bourne.

Not a bad thriller at all.
Posted by Scott Wilson at 3:55 PM