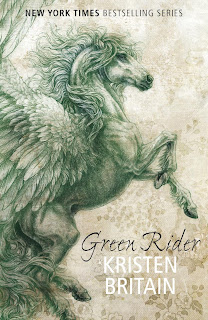 A captivating story, a race against time and a mission that could cost Karigan her life...

There's nothing Karigan can do, as the young man lies dying on the road. He had sworn to carry out his mission as a Green Rider - one of the legendary messengers of the king - and he has a life or death message that must reach King Zachary. Karigan may be unable to save him, but she can deliver his message. He makes her swear to it, to keep it secret and, with his last breath, he warns her to 'beware the shadow man...'

Pursued by an unknown assassin, following a path only her horse seems to know and accompanied by the silent specter of the original messenger, Karigan is going to become a legendary Green Rider herself. Caught up in a world of deadly danger and complex magic, compelled by forces she cannot understand, her simple promise to deliver a letter is about to become a race against time...and a race for her life...

Book 1 Green Rider begins the uncomplicated fantasy series in Britain’s series with a rather dramatic opening whereby the main character, Karigan G’ladheon, comes across one of the King’s messengers, or Green Rider, dying with two ominous black arrows sticking out of his back. Suddenly, Karigan is thrown into a dangerous world by promising to take the dying man’s message to the King. A far cry from her life as a merchant’s daughter and one you have to wonder why she chose to get involved with when the dying man’s last word are “beware the shadow man”.

Karigan keeps her promise and rides the Green Rider’s horse, called Condor to Sacor City to deliver the message. The adventure slowly unfolds through many perilous events on the way.

Green Rider is a good reader, not the most spectacular fantasy novel I’ve ever read, but it is an entertaining and well written story.
Posted by Scott Wilson at 7:05 PM