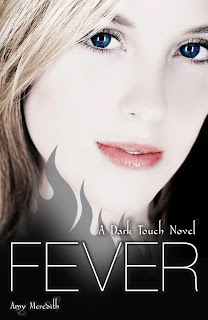 Deepdene has been swept by what seems to be a vicious tropical disease. Luckily Eve and Jess are both healthy so they're taking their chance to enjoy the unseasonal heat wave. But then teenagers start to disappear. The spread of the disease worsens and the town is placed under lockdown. A demon is among them. It could be anybody. And now there's nowhere to go...

The third title in this successful series. For all fans of Buffy the Vampire Slayer, Charmed and Twilight.

Shadows is a witty and engaging start to the Dark Touch series. It's pleasingly smart and filled with the kind of self-referential humour that's sure to appeal to the more jaded YA paranormal reader. It made me grin more times than I can count, and I'll definitely be looking out for The Hunt, the next book in the series, later in 2010. I'd recommend it to anyone looking for a light-hearted, upbeat supernatural read that doesn't take itself too seriously.

Fever is the third novel in the Dark Touch series by author Amy Meredith. The three main characters are back, Eve, Jess and Luke. Eve is 15 years old and loves nothing more than shopping with her best friend Jess and hanging out with her friends. She has no idea that she is the descendant of a powerful witch and about to come into powers of her own. With nobody to guide her about how her powers work it is up to Eve to figure things out and stop the demons that are currently making themselves at home in her town.

Eve has to battle a demon, while rather wanting to spend time with Jess than getting into a dangerous battle. If you liked the first two books then you will enjoy this one to.
Posted by Scott Wilson at 11:38 PM