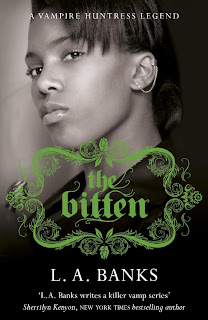 She is a woman who lives between pleasure and pain - the pure, scintillating pleasure of the flesh and the kind of pain that has rocked the world and left it strewn with chaos set to a hip-hop beat. Her name is Damali Richards. And when she makes love to a master vampire, it changes everything in a struggle between good and evil - with the future of humanity hanging in the balance...THE BITTEN.

In L.A Banks' astounding new VAMPIRE HUNTRESS novel, an unforgettable scene of seduction touches off a violent race around the world - and into a realm beneath us. For Damali, once a pawn, has been given a new, pulsating power of her own - having been bitten by lover and vampire extraordinaire Carlos Rivera. Between them, they know how high the stakes have risen. A powerful lord of darkness has hijacked a mystical key containing the blood of Christ. And for a world where blood runs like a river, one drop of this blood will be the end...

The Bitten is the fourth book in the L.A Banks Vampire Huntress series. The story continues on from the previous book with the vampire civil war narrowly prevented. Drama continues to unfold with a sinister master vampire stealing one of the keys that is part of the system that opens the gates of Hell through breaking one of the six seals of the apocalypse.

While this would cause the sun to turn black and allow the night walking vampires freedom to move about at any time, it would also bring about the end of mankind. Crazy idea by a warped vampire hell bent of total control.

Banks series is more dark and sinister than a lot of other vampire books sitting next to the series on the shelves in the bookstores. If you are after just another paranormal romance then this one is going to be a bit darker than you’d expect.
Posted by Scott Wilson at 9:35 PM