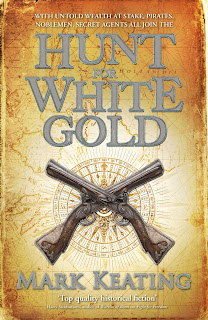 Rich in historical insight and told in a dramatic and engaging voice, this is a superb evocation of the period with a series character to rival Sharpe.

Sold by his father for four guineas, Patrick Devlin was working as a servant to Royal Navy Captain John Coxon when he was catpured by pirates. Now, Devlin has himself become one of the most feared pirates in the world - and Coxon his most bitter foe.

But in this thrilling new historical adventure it is not gold that Devlin is chasing, but something even more valuable. The early 18th Century is obsessed with the flavours of the New World - coffee and chocolate. And only one material enables the kings, queens and rising middle classes of Europe to drink without burning their fingers on the handles of their cups - Chinese porcelain.

In a brilliant conspiracy story reaching from the unknown empires of the East to the restless new colonies of America, a letter has gone missing. In the letter lies the formula for the manufacture of Chinese porcelain, and whoever can find the letter can name his price - and even change the course of history, by enriching the nation that owns the secret.

Valentim Mendes, a Portugese noble who has crossed swords with Devlin before, now seeks to blackmail him into finding the letter. And wherever Devlin goes, his nemesis Coxon is never far behind.

Mark Keating was born in North London and has spent most of his life working around the South East selling everything from comic-books to champagne. He now lives and works in Windsor, Berkshire with his partner and son.

Hunt for White Gold is the second book in the Patrick Devlin series by author Mark Keating, set in the 18th Century against a backdrop of piracy and the high seas. This book sees Devlin set out to unravel the secrets of “White Gold”, or fine China. The elegance of this Chinese porcelain has been a mystery to the Europeans for years and they are keen to unravel its manufacturing secrets. The man who could solve the mystery of something as seemingly mundane as fine China would make a fortune but where there’s booty, there’s always skulduggery.

Hunt for White Gold sees Devlin blackmailed into tracking down a letter smuggled out of China containing the centuries-old secret of ‘white gold’. Failure to do so with see his quartermaster and close friend, Peter Sam killed by the crowd who have kidnapped him.

Hunt for White Gold is a cross between the light hearted and humorous Pirates of the Caribbean and a more serious Blackbeard style story. The characters are well written and the story full of action and excitement.
Posted by Scott Wilson at 9:30 PM