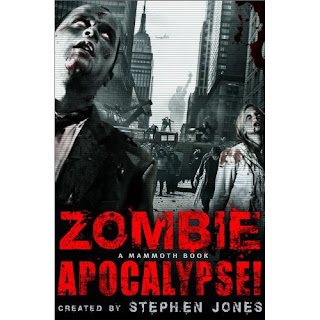 A collection of stories on a single theme: worldwide calamity has lead to an outbreak of zombies! Disaster and chaos reign, and over the course of a year from initial outbreak, the stories recount planes full of zombies, travel restrictions too late to save Europe, and zombies come to LA. Written to appear as factual accounts, these zombie stories will have your blood running cold!

This book is a very unique and exciting concept. Rather than just having a number of short pieces of unrelated fictional stories with a zombie theme, Jones has gone for a seamless stream of shorts from dozens of authors in various formats. There are diary notes, blog postings, handwritten notes, text messages, media transcripts, tweets and much more, making up the overall storyline.

It must have been a mammoth task to source the dozens of writers willing to base short snippets around a Zombie plague caused by the release of the Black Death burial ground under the Church grounds in Blackheath, UK.

Overall, I found this to be one of the most original and entertaining Zombie books I’ve read lately. I loved the way it was joined together from the views of survivors scattered around the UK. It was also brilliant in its originality with survivors trying to live a normal life while a Zombie plague was slowly taking hold of the country.
Posted by Scott Wilson at 2:15 AM