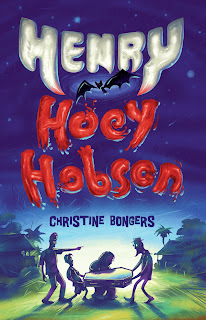 Henry Hoey Hobson is a hero to cheer for till your tonsils hang out on strings.

Twelve-and-a-half-year-old Henry Hoey Hobson is drowning in the dangerous waters of Year Seven. He arrives at his sixth school in as many years, Our Lady of Perpetual Succour, to discover that he is the only boy in the grade. The tiny school in inner-city Brisbane has lost most of its older boys to bigger Catholic colleges, leaving only a trio of male misfits a year below him, and in his year, an intimidating all-female line-up.

Fatherless, friendless and non-Catholic, Henry earns a reputation as a vampire on his first day, when ill-fitting braces make his mouth bleed. His mum, Lydia, is no help - she's running around town, in bright red platform heels and a skirt that's too short and too tight, chasing a pot of gold at the end of a real estate rainbow. Due to a recent growth spurt, Henry towers over his tiny, doll-like mum and swings between feeling protective and angry that she has abandoned him to his fate as a Perpetual Sucker.

To make matters worse, a pack of weirdos moves in next door. Manny, Vee, Caleb and Anders are creatures of the night. With their pale skin, black clothing and eerie coffin, they freak out the local kids. When they befriend Henry, they drive a stake through the heart of any chance he might have had of fitting in.

Henry's only chance to redeem himself is the school swimming carnival. But first he must deal with the withdrawn and tortured Anders' attempts to overcome his own dark past and earn a place in the light, at Henry's side.

Finally, Henry and his motley cheer squad must choose how they want to live their lives. Is living life at the margins enough for any of them?

Henry Hoey Hosbon is a well written, whitty and entertaining read aimed at the YA market by Brisbane author, Christine Bongers. Henry is a twelve year old kid that has moved around to six homes and schools in the last seven years. Henry is fatherless, practically motherless, and totally friendless. Adrift in a sea of seemingly hopeless instability, Henry is unprepared for the consequences when some weird but wonderful new neighbours not only move in next door—but also into his life and his heart.

The poor kid hardly ever sees his hardworking real estate agent mum, Lydia, often gone before he rises, Henry spends more quality time with his only relative on the phone than in person. He is virtually raised by a series of constant babysitters while his mother worked to support them. Henry is also going through the usual problems with puberty, as well as starting at a girl-dominated Year Seven at the local Catholic primary school to find that he is, literally, the only boy in the aptly named ‘Our Lady of the Perpetual Succour’.

On top of all of this, Henry hears new neighbours moving in next door, who also happen to be vampires. This is where the real dramas begin for young Hobson.

I highly recommend this for any YA reader.
Posted by Scott Wilson at 12:12 AM