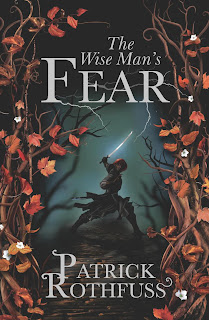 The hottest fantasy novel of the year is here at last.

Sequel to the extraordinary THE NAME OF THE WIND, THE WISE MAN'S FEAR is the second installment of this superb fantasy trilogy from Patrick Rothfuss.

Picking up the tale of Kvothe Kingkiller once again, we follow him into exile, into political intrigue, courtship, adventure, love and magic...and further along the path that has turned Kvothe, the mightiest magician of his age, a legend in his own time, into Kote, the unassuming pub landlord.

Packed with as much magic, adventure and home-grown drama as THE NAME OF THE WIND, this is a sequel in every way the equal to its predecessor and a must-read for all fantasy fans. Readable, engaging and gripping THE WISE MAN'S FEAR is the biggest and the best new fantasy novel out there.

Patrick Rothfuss had the good fortune to be born in Wisconsin in 1973, where the long winters and lack of cable television encouraged a love of reading and writing. After abandoning his chosen field of chemical engineering, Pat became an itinerant student, wandering through clinical psychology, philosophy, medieval history, theater and sociology. Nine years later, Pat was forced by university policy to finally complete his undergraduate degree in English. When not reading and writing, he teaches fencing and dabbles with alchemy in his basement.

The Wise Man's Fear is the sequel to The Name of the Wind and the second in The Kingkiller Chronicle trilogy. Since the trilogy was originally one extremely long novel split into three parts, The Wise Man's Fear has little preamble and not much of the climax.

That said, it doesn’t suffer from the middle book syndrome of a trilogy and is a delight to read.

The characters regularly tell each other stories, and Kvothe in particular prides himself on being an excellent story-teller. Kvothe's story, as told in The Name of the Wind and The Wise Man's Fear, is much like many of the stories told by the characters within. It is a beautiful tale that encourages you to enjoy the journey, instead on focusing only on the end goal. Most books are highways, straight and true, with perhaps a bit of character development from side to side along the way.

Kvothe's goal is to find the Chandrian, but unfortunately for Kvothe, the Chandrian are a great mystery. So while the end goal remains the same throughout, we witness Kvothe's life as it progresses. And Kvothe has a very interesting life, including adventure upon adventure, and resulting in Kvothe's ultimate notoriety.

The Wise Man's Fear includes masterful characterization and many many stories within the story. As Kvothe seeks the Chandrian, he repeatedly runs into trouble. His sharp and curious mind encourages him to learn, while also encouraging him to shoot his mouth off imprudently at inopportune moments.

With such a well written novel, I can’t wait to read the final instalment in this trilogy.
Posted by Scott Wilson at 10:12 PM