BOOK REVIEW: Show Me the Funny!: At the Writers' Table with Hollywood's Top Comedy Writers 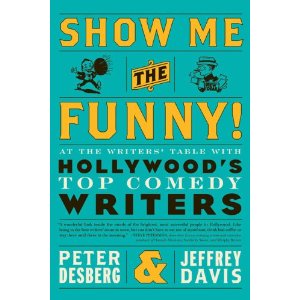 Title: Show Me the Funny!: At the Writers' Table with Hollywood's Top Comedy Writers

Enjoy a unique glimpse into the intelligent and quirky inner workings of the comedic mind! Show Me the Funny! presents 28 top comedy screenwriters from the revered figures of television's ―Golden Age‖ to today's favourite movie jokesters. Authors Desberg and Davis put an innovative spin on the traditional interview: each writer was given the same loosely structured comedic premise and asked to develop it in any way he or she wanted-no rules, no boundaries, no limits! The result is a hilarious and illuminating look at the comic process.

A fantastic and humorous book about the talented writers of some of the most successful comedy series on TV and film. Once they are given the writing premise to expand upon, the results are a peek at the creative minds of the men and women behind the curtain of Comedy.

The chapters (each one a separate interview with a famous TV/movie writer or writing team) are long enough to allow for an in-depth creative run at the premise, while short enough to be read quickly and glean just a little bit of the scripted alchemy behind shows like "Cheers," "Everybody Loves Raymond," "The Cosby Show" and "The Honeymooners."

There are also chapters by Leonard Stern (co-creator of Get Smart) o Sherwood Schwartz (Gilligan’s Island, The Brady Bunch), Peter Casey (co-creator of The Jeffersons, Cheers, Wings, Frasier), Phil Rosenthal (co-creator of Everybody Loves Raymond), Ed Decter (co-writer of There’s Something About Mary) and more!

The entire concept and deliver of this book are very unique and is delivered with a hilarious result.
Posted by Scott Wilson at 7:52 PM

Your blog looks nice, even so it would be far better if you’ll be able to use lighter colors too as a professional design. This will make sure that a lot more readers come to check it out.Informative post by the way!

I don’t bookmark sites but i will bookmark this! LOL!