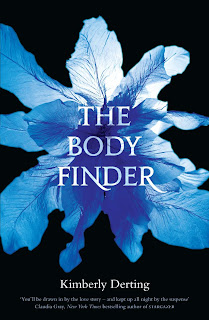 Exciting new YA - A fantastic blend of paranormal, romance and thriller.

Violet Ambrose is grappling with two major issues: Jay Heaton and her morbid secret ability. While the sixteen-year-old is confused by her new feelings for her best friend, she is more disturbed by her "power" to sense dead bodies or at least those that have been murdered. Since she was a little girl, she has felt the echoes the dead leave behind in the world...and the imprints that attach to their killers.

Violet has never considered her strange talent to be a gift, but now that a serial killer is terrorizing her small town Violet realizes she might be the only person who can stop him.

Despite his fierce protectiveness over her, Jay reluctantly agrees to help Violet find the murderer and Violet is unnerved by her hope that Jay's intentions are much more than friendly. But even as she's falling in love, Violet is getting closer to discovering a killer...and becoming his prey herself.

Kimberly Derting’s The Body Finder deals with a topic that you usually don’t find in a YS novel, a Serial Killer. It also deals with a teen who can sense death. A sound, a smell, a feeling, a presence - somehow, ever since she was little, Violet Ambrose could find things that had died. She discovered these abilities first by only finding dead animals, but one particularly horrifying experience at age eight had Violet discovering the body of a young girl. So far, Violet has never been overly-traumatized by her special ability. She has the full support and understanding of both her parents and her best friend, Jay Heaton, so she's never had to deal with this talent all alone.

This book is written in the format for the YA audience, but I think that the topic and theme would be better suited to an adult market.
Posted by Scott Wilson at 3:20 PM