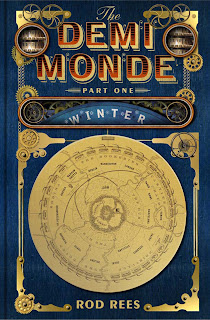 The Demi-Monde is the most advanced simulation ever devised. Thirty million people ruled by history's cruellest tyrants, locked in eternal civil conflict. The intention: to create the closest thing to Hell, and prepare soldiers for the nightmarish environment of war.

But something has gone badly wrong. Reinhard Heydrich – or at least a simulacrum resembling the Nazi monster – has kidnapped the President's daughter from the Real-World and concealed her within the Demi-Monde, making it impossible for the program to be switched off. This achieved, he has cut off all contact with reality.

It falls to Ella Thomas, a young jazz singer, to infiltrate Heydrich's virtual domain and rescue the missing girl. But once inside she will discover that everything in the Demi-Monde is not as it seems, and that the Real-World may be in more danger than everyone outside realises...

The Demi-Monde: Winter introduces readers to one of the most believable, almost extravagantly detailed worlds ever created, where history's most fascinating figures and cruellest tyrants rub shoulders with a rich cast of characters. In a fast-paced, action-packed narrative Rod Rees manages to explore some of life's deepest dilemmas, and suffuses the story throughout with wit and humour.

Rod Rees is married to the Russian-born jazz singer Nelli Rees. He has previously written books under a pseudonym. The Demi-Monde: Winter is the first novel published under his real name. His website can be found at www.thedemi-monde.com

The Demi-Monde is a brilliant debut novel for Rod Rees set in a futuristic world where a military training simulation system goes out of control. I was impressed by the originality of this setting, which kind of reminded me of The Matrix in some respects.

The mix of the Victorian era and futuristic setting is very much a traditional Steampunk setting with the twist of horrific real life monsters such as Aleister Crowley, Henry Tudor and senior Nazi SS figures built into the virtual training environment. The Demi-Monde is a virtual world that is completely self-contained and independent from human control, created to train the military in the most realistic and hostile environment they would be subject to in the real world. Unfortunately, if you die in the Demi-Monde you are left good as dead in the real world as well.

When the president’s daughter becomes trapped in the Demi-Monde, a covert rescue mission is established to rescue her. The characters Ree’s has developed are vivid and full bodies, making the read an extremely interesting and full on. There is also a fantastic web site to compliment the book with interactive links, maps and information.

Can’t wait for the sequel.
Posted by Scott Wilson at 5:59 PM