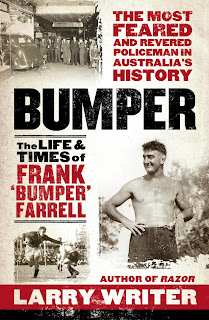 Title: Bumper – The Life and Times of Frank Bumper Farrell

The sprawling saga of a legendary Australian character.

Frank Bumper Farrell was the roughest, toughest street cop and leader of a vice squad Australia has ever seen. Strong as a bull, with cauliflowered ears and fists like hams, Bumper s beat from 1938 to 1976 was the most lawless in the land - the mean streets of Kings Cross and inner Sydney. His adversaries were such notorious criminals as Abe Saffron, Lennie McPherson, Tilly Devine and Kate Leigh and their gangs as well as the hooligans, sly groggers, SP bookies, pimps and spivs.

Criminals knew just where they stood: he would catch them, he would hurt them, and then he would lock them away. He was a legendary Rugby League player for Newtown, and represented Australia against England and New Zealand.

Here s Bumper Farrell in brutal, passionate and hilarious action . . . saving Ita Buttrose from a stalker; sparking a national scandal when accused of biting off a rival player s ear; beating Lennie McPherson so severely the hard man cried; single-handedly fighting a mob of gangsters in Kings Cross and winning; terrorising the hoons who harassed the prostitutes in the brothel lanes by driving over the top of them; commandeering the police launch to take him home to his beach home, diving overboard in full uniform and catching a wave to shore; dispensing kindness and charity to the poor.

I’ve never hear of Frank Bumper Farrell before so had no idea what to expect when digging into this book and reading about his life. The blurb actually sounded the story was going to be about a hard-arsed cop who was on the seedy side. I mean, being a gambler, hard drinker devout Catholic and deadly enemy doesn’t sound like someone who is a wholesome character who’s going to have a nice, clean life, regardless if he was a police officer or not.

The story was quite interesting, although it doesn’t do much to build the people’s confidence in the police when you hear of the sort of things that people like Farrell did, or was just accused of doing. There was an instance where Farrell was accused of biting another football player when he was the Captain of the Newton Rugby League team. It’s things like this that make you wonder.

I’m not sure if this book was to glorify Bumper as a police officer and football player, but the more i read, the more I though. Here’s a thug and a bully that got away with his brutality just because he had a badge and the person he caught and hurt didn’t. I realise the police force was different between 1938 and 1976 when he was an officer, and his beat was Kings Cross, but come on.

I’m glad I read this book as it really opened my eyes to a different side of society.
Posted by Scott Wilson at 6:41 PM