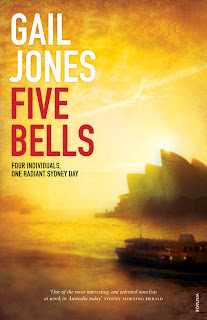 An exquisite and moving new novel from this master storyteller.

On a radiant day in Sydney, four adults converge on Circular Quay, site of the iconic Opera House and the Sydney Harbour Bridge. Crowds of tourists mix with the locals, enjoying the glorious surroundings and the play of light on water.

But each of the four carries a complicated history from elsewhere; each is haunted by past intimacies, secrets and guilt: Ellie is preoccupied by her sexual experiences as a girl, James by a tragedy for which he feels responsible, Catherine by the loss of her beloved brother in Dublin and Pei Xing by her imprisonment during China's Cultural Revolution.

Told over the course of a single Saturday, Five Bells describes four lives which chime and resonate, sharing mysterious patterns and symbols. But it is a fifth person, a child, whose presence at the Quay haunts the day and who will overshadow everything that unfolds. By night-time, when Sydney is drenched in a rainstorm, each life has been transformed.

Five Bells is a novel of singular beauty and power by one of Australia's most gifted novelists.

Five Bells is set in Sydney, Australia around the Circular Quay revolving around the lives of four individuals over one summer’s day. Like the author, all the characters are new to Sydney: one from China, one from Ireland, and two from Jones’ own Western Australia. Theirs are separate backgrounds, but the day’s circumstances draw their narrated experiences together, and the secrets, haunting experiences and travails of their earlier lives are revealed. Only two of the four characters know each other. After nearly 20 years, James and Ellie are planning to meet again. Both are nervous and curious to see the effect of time on each other; to gauge whether the unusually deep connection they shared as teenagers in a small West Australian town remains. Gradually, both of their back-stories emerge

Themes of memory (and forgetting) reverberate through Jones’ work. As she did in Sorry and Dreams of Speaking, small, intimate, private lives are connected in Five Bells to a larger, universal narrative. The tiny world of Pei Xing, living out her life quietly in suburban Bankstown, is connected, through her tragic family past as a victim of China’s Cultural Revolution, to the great movements in world history. Similarly, echoes of the Irish diaspora are there in the story of Catherine, living in solitary hope, a world away from the Dublin where she lost a beloved brother. Ellie and James, childhood lovers on the other side of the continent, reconnect on this fateful Saturday, but their connection is now as irrevocably fractured as it was cemented then.
Posted by Scott Wilson at 10:07 PM