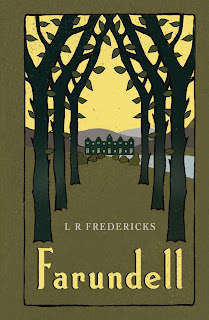 In the golden summer of 1924 Paul Asher, still shattered by the trauma of the Western Front, comes to Farundell, an idyllic country house set deep in the Oxfordshire countryside. There, he falls under the spell of the rich and eccentric Damory family: the celebrated Amazon explorer Perceval, Lord Damory, now blind and dying, whose story echoes Paul s own strange dreams, brilliant thirteen-year-old Alice, on the cusp of adulthood and, like Paul, a seeker of knowledge and, most fatefully, the wild and beautiful Sylvie, with whom he falls passionately in love.Before summer s end, there will be tragedy, comedy, resolution and, for Paul, a revelation that will change his life forever.

A stunningly original debut novel, Farundell is literary fiction with a magical twist.

Farundell is debut author LR Frederick’s attempt to write a masterpiece in the similar vein to Brideshead or Wuthering Heights, but with an experimental form of writing. Set in England in the 1920’s, Farundell is rich in mysticism and magic realism and themes of doomed romance.

The book is about Paul Asher, a soldier who returns home to Oxfordshire, England from Somme in a severe state of trauma looking for purpose. Asher takes a job as transcribing the memoirs of an elderly, blind millionaire, Percy, who is quite eccentric and creates an ethereal state through his dreamlike recollections of his past. The story of Percy takes up back to the tribal life in the Amazon that appealed greatly to him. There are four story arcs within this novel that are quite distinct and equally as interesting.

Fredericks has written an epic novel that will no doubt have a cult following and become a best seller once it’s brilliance is understood by the wider reading society.
Posted by Scott Wilson at 8:47 PM