BOOK REVIEW: The Laws of Magic 1: Blaze of Glory 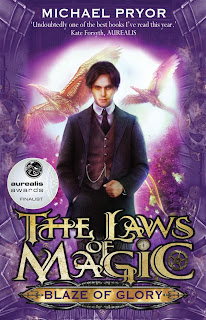 Title: The Laws of Magic 1: Blaze of Glory

Now with stunning new covers from the team who brought you Ranger’s Apprentice!

Aubrey Fitzwilliam is the son of a prominent ex-prime minister. He's also brilliant at magic, but he's stuck at military school. At least he has his best friend, George, there to back him up. George would follow Aubrey anywhere - and with Aubrey's talent for thinking up daring schemes that will get them both in trouble, that's no easy thing to do.

At a royal hunting party, the boys discover a golem, a magical creature built to perform one task: to kill Prince Albert. Aubrey and George are hailed as heroes for foiling the murder attempt - but who sent the golem, and why? Aubrey is far too curious to let the authorities handle this one, and he and George start investigating . . .

Laws of Magic - Blaze of Glory is the first book in Michael Pryor’s brilliant YA series set in an alternate England known as Albion. It is a great take on the Industrial Revolution where magic takes a similar development to the development of the world.

Following the story of Aubrey Fitzwilliam, son to a prominent public figure and wealthy family lineage, the story weaves about his life from when he dabbled in the wrong type of magic and killed himself. Now he is he partly dead and becomes involved in a fairly dangerous plot that is unfolding about him causing many of his friends to be affected.

This book is the start of a great series that I will be following closely.
Posted by Scott Wilson at 9:31 PM