BOOK REVIEW: One Thing Lead to Another 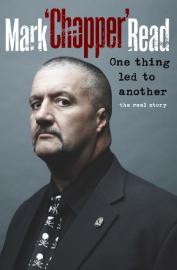 Title: One Thing Lead to Another

Meet Mark 'Chopper' Read. You think you know him. His books have sold hundreds of thousands of copies in Australia. He's been the subject of an internationally successful film. His one-man shows have toured Australia to sell-out crowds. He's the most recognisable criminal brand name in Australia. But the truth is, you don't know him at all. The real Chopper has been an enigma - until now, that is. This is the definitive Chopper story. From his strange, tortured childhood to the formative years as a young gang member and developing criminal, to his decades in and out of prison in Victoria and Tasmania, to his friends and enemies, and his crimes and punishments, this book gives us the true stories that lie behind the Chopper myths, as well as the stories he's never revealed before.

It is amazing how the underworld of Australian crime operates and the sort of people that Read tells us about, both as friends and enemies he met over the years in and outside of the various prisons he frequented.

If you enjoyed the previous books by Read then you will appreciate the new information in this latest book.
Posted by Scott Wilson at 6:17 PM