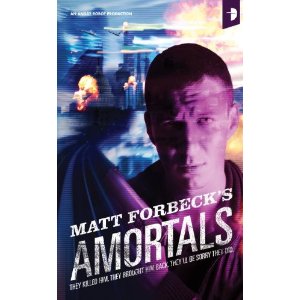 Today you die. Today you are reborn. Today you hunt the man who killed you. It's Lee Child vs. Altered Carbon in a high-tech blast of tough-as-nails future thrills. Matt Forbeck arrives as the new king of high-concept - with a blockbuster action movie in a book. In the near future, scientists solve the problem of mortality by learning how to backup and restore a person’s memories into a vat-bred clone. When Secret Service agent Ronan "Methusaleh" Dooley is brutally murdered, he's brought back from the dead to hunt his killer, and in doing so uncover a terrible conspiracy.

Amortals is a sci-fi thriller by author Matt Forbeck set in 2168 where Secret Service agents who die during the service of their country are given a second chance under Project Amortal. This is a medical procedure where the dead agent’s memories and psyche are “downloaded” into the brain of a cloned body.

The book starts with agent Ronan Dooley investigating his own murder, which is the eighth time he has been killed in the line of duty. The story runs along at a rapid pace in a world not too far advanced from our own but with some futuristic elements and technology.

I enjoyed this thriller and look forward to reading more by this author.
Posted by Scott Wilson at 8:25 PM