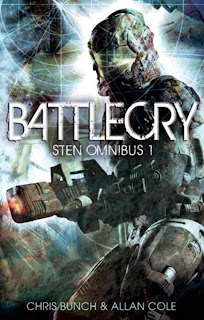 An omnibus edition of the first three books in this fast-paced military SF series, full of action, adventure and intrigue, from the undisputed masters of military SF.

When his family is killed in a mysterious accident, Sten rebels, harassing the Company from the metal world's endless mazelike warrens. It s a fool s errand, of course - no man can stand against the might of the Company and expect to live. But Sten isn't just any man.

From the corrupt and brutal factories of Vulcan to the plots and intrigues of the Imperial Court, the galaxy is about to come face-to-face with the ultimate warrior. Sten s already learned how to survive - now he wants more; he wants control of his own destiny. And he ll do whatever it takes to get it.

No compromise, no retreat, no surrender. Only Sten.

This omnibus edition contains: STEN, THE WOLF WORLDS and THE COURT OF A THOUSAND SUNS.

Chris Bunch was a Vietnam veteran and served as a patrol commander and combat correspondent for Stars and Stripes. He wrote for the underground press, outlaw motorcycle magazines and Rolling Stone. He died in 2005. Allan Cole is a best-selling author, screenwriter and former prize-winning newsman.

Battlecry: Sten Omnibus 1contains the first three of the eight books in the Sten series, Sten, The Wolf Worlds and The Court of a Thousand Suns by authors Chris Bunch and Allan Cole. The Sten Chronicles is set in a futuristic world seen through the eyes of a normal working class man, Karl Sten, as he grows to become a hero. The original series was written between 1982 and 1993, with one of the authors, Chris Bunch passing away in 2005.

The first book opens with young Karl Sten growing up on the industrial factory world known as Vulcan. Sten’s family is killed and the coverup of the real events see young Sten rebel and meet up with a band of outlaws.

Over the course of time, Sten becomes part of the military, rises to the head of Team 13 and battles to bring down the corrupt government of Vulcan.

The second book sees Sten leading Team 13 working for the Eternal Emperor to bring another corrupt government and cluster of worlds, known as the Wolf Worlds under control.

By the third book in the omnibus, The Court of a Thousand Suns, we see Sten as the commander of the Eternal Emperor’s bodyguard, known as the Imperial Gurkhas. The plot is smaller in this book with main events revolving around a bombing in a local bar and a plot to kidnap the Eternal Emperor.

If you enjoy Heinlein’s Starship Troopers then you will see some similarities with this series and enjoy it just as much. Battlecry is a great collection of the first books in this classic sci-fi series.
Posted by Scott Wilson at 8:12 PM