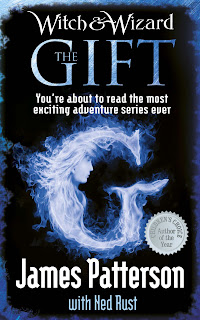 Whit and Wisty All good are leading the Resistance against the despotic New Order. Hailed as ‘Liberators’, they are prophesised to overthrow the ruling regime. As such, Whit and Wisty have achieved notoriety and are very much top of the New Order’s ‘most wanted' list. But, as time passes, they are becoming more skilful at harnessing their magical capabilities and their powers are growing stronger every day.

The One Who Is The One, leader of the New Order, has escalated the intensity of his bid to elimate the Allgoods and will allow nothing to stand in his way. But, there is something he needs from them first – their ‘Gift’. If he manages to take it from them, it could bolster his already immense magical powers to a level unimaginable. And this could make The One Who Is The One, and the New Order, unstoppable…

Witch & Wizard - The Gift is the second novel the young adult series by James Patterson. It follows on nicely from the first book in the series, which was left on a real cliff-hanger. The Gift continues the ongoing adventures of Whit and Wisty Allgood in their ever changing world. Freeland (the outlying areas populated by children who have managed to avoid being kidnapped, imprisoned, and brainwashed) is growing smaller as the New Order scouts delve farther and farther into the territory.

The leader of the New Order, The One Who Is The One, is on obsessive quest to seize control of the Allgoods and their undeniable gifts. In this novel, the dystopian theme is further developed as we learn more about how the New Order operates. Magic isn't magic, but energy. Children that they want to brainwash and use for New Order purposes are not witches and wizards, although those the Order rejects are labelled with these titles and expelled to exile.

If you like the James Patterson style of writing, with short chapters and fast paced stories, then you’ll like this one as well.
Posted by Scott Wilson at 7:28 PM