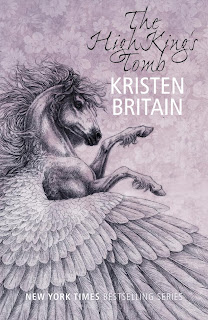 Scott: Thank you so much taking the time to chat with us here at The Fringe magazine. I’ve recently finished reading your latest novel, Blackveil and thoroughly enjoyed it. Was it hard picking up the story after writing The High King’s Tomb four years ago?


Kristen: Thanks for the interview, Scott! I’m pleased you enjoyed Blackveil. I don’t think starting it was anymore difficult than the other books. There is always a period of downtime to recover from the previous book, and lots of brain activity figuring out how the next chapter in the story is going to go—lots of note taking and thinking. Actually, the process is pretty much like that through the entire course of writing the book.

That said, I do think a next book in a series can be more challenging than a stand-alone novel because it must catch the reader up with previous volumes and maintain continuity. It takes a good bit of balancing to decide what background information to include, and when. And then there is the whole story arc thing. What plot will go to conclusion in this book, while continuing the arc story of the series?

Scott: Each book in your series seems to take four years to be released. What is the main reason for the length of time between each book?

As for previous books, all I can say is that every writer is an individual and works differently and at different speeds. All of us contend with life’s issues, and maybe other writers are better adept at keeping up with the writing during challenging times than some, like me. Individual publishers are also different about how long they will take bring out a book, as they must take into consideration what is best for the market. I waited two years for Green Rider to be published in North America, for instance. My one hope is that because I’m careful and take time to get the writing right and allow the story to gel, my books are better for it. In a perfect world I’d have a book out each year, but alas, my world is not perfect, nor am I. 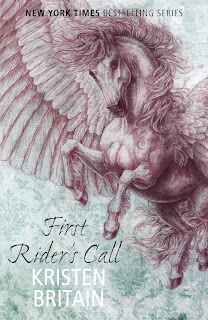 Kristen: I don’t have a typical day. Some days there are no words. Some days there are thousands. Sometimes I’m working out how a scene will flow, or I must deal with correspondence and other business issues. I usually don’t keep quotas because I handwrite first drafts, and it’s a little more difficult to judge word count. Everyone’s circumstances are different. For instance, I do not have a family to care for or another job, so it’s okay for me to write throughout the day (or not) without worrying about those other demands. (Well, I do have to walk the dog occasionally!) I think the method one uses to get the work done is not important, just so long as it does get done.

Kristen: My love of reading, from when I was very young, sparked my love of writing. I had actually started writing my first novel when I was in the fourth grade (about 9 years old), but a couple years later I was so embarrassed by it I tore it up. After reading TLotR at 12 or 13, I tried again and actually took the book to completion. It’s nothing that will ever see the light of day, but it is at the root of the Green Rider series, and it was very important at that young age to learn that I could write a novel-length work. Later on when I thought more seriously about becoming a published writer, I did try to get short stories published, but no one wanted what I wrote, and mostly there was no one publishing short traditional adventure fantasy (at least not that I could find). This was the early 1990s, so the market would have been quite a bit different than today. Eventually I tired of all the rejections, so in the fall of 1992, I sat down to begin work on my true love: long fiction. I am proof that you don’t need to have a track record of published short stories to get a novel published, though it no doubt helps to convince publishing professionals to look beyond a query letter. It’s best for aspiring writers to know that there are many avenues to publication, and no single route is the rule.

Kristen: I guess I’d say my novels are pretty character driven, and so I follow the lead of my characters. I’ll put obstacles and problems in their way, but it’s up to them to find a way out. Sometimes, when I’m weary of the slog, I just want to kill them all! That would show them! Ahem….

The research tends to happen as needed during the course of writing. I guess that would qualify as organic? I also rely a lot on experience. I spent a lot of time with horses in my youth, for instance. I know the difference between a forelock and a fetlock.

Kristen: Currently I’m on the third book of the Kushiel trilogy by Jacqueline Carey. Next up will be Inside of a Dog: What Dogs See, Smell, and Know, by Alexandra Horowitz, then it will be on to some Brandon Sanderson…. Hoping to read the recent biography of Cleopatra as well.

My five favorite books? Weeell, that’s not easy, but here are some books that influenced me early on: The Lord of the Rings by J.R.R. Tolkien, The Dragonriders of Pern by Anne McCaffrey, and the Prydain books by Lloyd Alexander. Other loves when I was quite young include Peanuts cartoons by Charles Schulz, books by Beverly Cleary, Nancy Drew mysteries, and The Black Stallion books by Walter Farley. In fact, when I was younger, I read anything with horses in them.

Scott: Has working as a Ranger in the National Parks of America influenced any elements of your writing? It must have been majestic working in such a beautiful and natural environment and living in a Log Cabin so close to nature.

Kristen: Definitely. In addition to our great natural parks, the National Park Service protects and administers historic and cultural sites, so through the course of my 15 years as a ranger, I had a very hands-on experience with my country’s history and history-makers, as well as an intimate view of our natural parks. All of that experience folds into my writing one way or another. As I wrote Green Rider, I’d be out on the hiking trails or riding a bicycle thinking about the story, so the nature aided the process, and the nature of the park (Acadia National Park in Maine) helped me create the natural landscape setting for the novel. Thanks to my career in the parks, I got a great grasp of the process of history as well as the natural world, both of which are important elements in the books.

Kristen: Actually, I live on an island, and though it isn’t exactly deserted, it can feel that way in winter…. What authors would I want with me? Well, not Snooki. Edgar Allan Poe would be terribly disturbing. If stranded long enough I might be able to begin to understand the Elizabethan parlance of Shakespeare… Not sure about other writers. But I do think I’d want Doctor Who!

Scott: Your art is very impressive. Do you prefer writing or drawing?

Kristen: Thank you! There was a time when I thought I was going to grow up to be a cartoonist, but then the writing thing sort of took over. As much as I enjoy drawing, I prefer the process of creating a written story. I’m still drawing or painting, but it’s in my imagination.

Thank you for the opportunity, Scott!

Check out Kristen's web site here; http://www.kristenbritain.com/
Posted by Scott Wilson at 12:58 AM