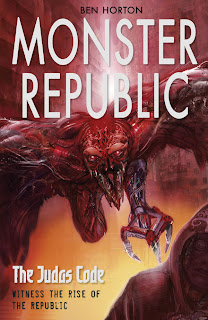 The second book in this power-paced new series packs no punches . . . witness the rise of the Republic.

The explosion at the Prime Minister's visit to Long Harbour means the cover of the Monster Republic is blown, and they are forced deep into hiding. Lazarus Fry turns his tactics to infiltration, and is confident of their swift crushing. Plus his new pets, the Blood Hawks, are hungry to get their talons into some fresh kill . . .

But Fry hasn't counted on this band of rebel kids' awesome will for survival. When your back is against the wall, the only option is to come out fighting . . .

Monster Republic – The Judas Code is the second book in this series by Ben Horton, written for the YA market. It sees the cover of Monster Republic blown after the explosion at the Prime Minister’s visit to Long Harbour.

The Judas Code is a real teenage boy novel packed with monsters and technology, the best of everything. The pace of this book is quite fast and it was hard to put down as there was constantly something I wanted to see resolved.

Book one in the series was the story of a youth named Cameron, caught up in a massive explosion who awakes to find that he has been worked on by Lazarus Fry. Severely disfigured from the accident is just one aspects affecting Cameron, who was also been given various bionic enhancements. It also detailed his escape from Fry's compound, and his discovery that he is not alone as he is taken under the wing of other youngsters who’ve been experimented on. This group of youths called themselves the Monster Republic.

Cameron's character is still a key element of The Judas Code, which follows straight on from the events at the end of its predecessor. However, this story has a broadened focus in that the plot is now just as much about the group and their attempts to stay alive and hidden from the armed forces that are amassing in Broad Harbour and its surrounding area.

After the horrific experiments by Fry, there are many other members of the Monster Republic who don’t trust Cameron. This looks like there will be enemies both within and outside of the Republic in future issues.
Posted by Scott Wilson at 8:41 PM