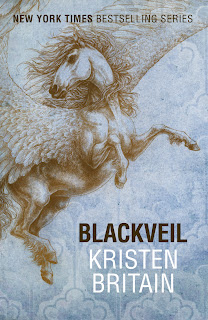 Page-turning commercial fantasy from a master of the genre.

Karigan G'ladheon was a regular girl until she stumbled across a dying man. There were two arrows embedded in his back and wherever his horse was taking him, he was going to die before they got there.

He gave Karigan his horse, his cloak and his brooch - the symbol that he was one of the King's Green Riders - and, with them, his mission. To deliver a message to the King. He made her swear to do it...even though the Shadow Man who killed him would be hot on her trail. That mission made her a Green Rider.

Now, her first legendary mission is long complete. Karigan has learnt to wield the magic her Green Rider brooch allows her to access and she's used it to defy some of the most terrifying dark magicians of the age. But while Mornhavon the Black has gone, he's not defeated. His restless spirit haunts Blackveil, the lethal, corrupt forest that stands beyond a failing magical wall at the edge of King Zachary's territory.

Blackveil is the fourth and latest instalment in the Green Rider series by New York Time award winning author Kristen Britain. I’m sad to say that the book ends on a dramatic cliffhanger and with the pace Britain writes, it’s going to be at least another four years before we get to find out what will happen. I think they should pass a law that makes any author writing a series to have to publish a book every year while continuing work in their current series.

Anyway, Blackveil neatly wraps up some of the elements from the previous novels in this series while leaving quite a few characters with dark clouds over their heads at the end of this book. This was quite unusual for Britain as each previous book has been resolved to a higher degree.

Quite a good read once again.
Posted by Scott Wilson at 7:47 PM