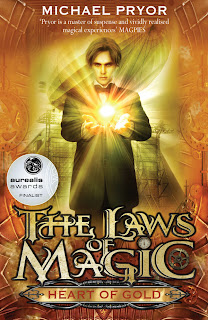 'Michael Pryor is the king of steampunk for teens.' Visual Bookshelf review

At a loss after finishing their exams, Aubrey and George travel to the Gallian capital, Lutetia. Aubrey is pursuing a cure for his condition, but his family have other ideas, and he's soon burdened with a royal mystery to solve, a missing ornithologist to locate and a spot of diplomatic espionage. These tasks should keep Aubrey occupied - but that would be underestimating Aubrey's sense of curiosity and uncanny knack of being in the wrong place at the wrong time.

Someone is stealing people's souls and turning them into mindless monsters. The country's magical lifeline, the Heart of Gold, has been stolen, leaving the city in chaos. And what is the connection with the sabotage of an experimental airship?

Aubrey, George and a somewhat reluctant Caroline are on the case . . .

I’ve read a few comments about how the characters remind some readers of the youngsters in Harry Potter, with the coming of age and learning of magic and all of its wonders. But I didn’t like Harry Potter at all and disagree with these suggestions. Pryor’s story is tighter and the characters are better developed. It would be great to see a movie made from this series.

I began reading this sequel to Pryor’s Laws of Magic – Blaze of Glory, right after the finishing the first one, so it flowed on very nicely from the dramatic ending. It was great to see the seamless flow of the story in the SteamPunk setting of an alternate London during the industrial revolution.

The main characters, Aubrey and George continue their adventures and travel to the Gallian capital, where a friend is studying. We see Aubrey finally discover a cure to his half dead state during the course of the story.

Great sequel to Blaze of Glory
Posted by Scott Wilson at 9:50 PM