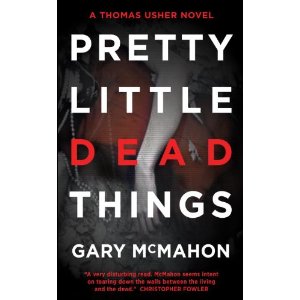 Thomas Usher has a terrible gift. Following a car crash in which his wife and daughter are killed, he can see the recently departed, and it's not usually a pretty sight. When he is called to investigate the violent death of the daughter of a prominent local gangster, Usher's world is torn apart once more. For the barriers between this world and the next are not as immutable as once he believed.

Pretty Little Dead Things is the first in a series of Thomas Usher novels by author Gary McMahon. The reader first meets Usher through stepping into the past and into a pivotal moment in the Usher’s life, a car accident, in which he loses both his wife and young daughter. The vivid details of this accident leave the reader know exactly what sort of life was destroyed, and how Usher became how he presently was.

The story then returns to the present, fifteen years on from the event that shaped Usher’s life. In present day London, we find Thomas Usher following the daughter of Bradford businessman, Baz Singh. While Usher is not a private detective, his actions seem to find him in this type of role helping people out.

Through the course of the book we find that Usher has an ability to communicate to the dead. He sees the dead, communicates with them, even though they do not speak to him. Somehow, he is able to pick up subtle nuances of understanding from them, their expressions and gestures, their stories. As he tails Baz’s daughter, Kareena, Usher tells the reader how he has managed, for thirteen months, to secure these visions and visitations.

While Usher sees his ability as a curse and would rather live without it this as he follows the girl to a forbidding looking housing estate, he stumbles upon the immediate aftermath of her murder and find his repressed power surfacing again.

Torn between life and death, unable to fully move on from the loss of his wife and child, evidenced in his inability to sell the house they bought together just prior to the accident. Throughout all his countless experiences with ghosts, the two spirits he most wishes to see never appear. So he carries on, hoping he’ll see them one day, and seeking to help others in the meantime. Excellent characters, strong settings and beautifully researched, this novel is both gut-wrenching and heart-breaking in the exploration of its themes.
Posted by Scott Wilson at 7:26 PM