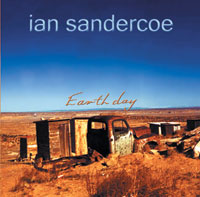 Ian Sandercoe began writing songs for the Earthday album over ten years ago.

Tracks On the Earthday Album include:

Media has described his music style as Post-Modern Folk-Rock.

This music writing is foresight to the current interest in the environment and state of humanity and the planet.

Earthday covers topics from social imbalance, disharmony and the search for truth and balance globally. With digital technology and the sharing of information people are now fully able to look outside the square and contribute towards their local community, state, national and international communities.

Ian Sandercoe live provides a breathtaking insightful musical journey into this world and its people as perceived by Ian.

Global messages expressed throughout the album, pure hair-raising tunes with foundation and substance. Ian Sandercoe delivers each show with an abundance of passion and soul frolicking ambiance.

The Earthday album will take you on a journey, with 15 songs ranging in style from intense rock ballads to thought provoking rock songs.

ALBUM EARTHDAY…is a unique collection of contemporary Australian rock songs written by Ian Sandercoe and includes co writes with amongst others Rob Pardė.

Ian Sandercoe’s album Earthday is a great, easy listening album full of tracks to sit back and chill out to. There are 15 tracks on this cd, which is quite a lot compared to many other cd’s out at the moment. Earthday’s songs cover topics from social disparity, discord and the search for certainty and equilibrium worldwide.

If there was any artist that I could compare Sandercoe to it would be a cross between Christopher Cross, Paul Kelly and Cliff Richard. Ian’s voice is very smooth and soothing and the melodies are a cross between folk and new age.

This album is perfect to put on when you’ve got guests over for a dinner or just chilling on a Sunday afternoon.
Posted by Scott Wilson at 12:37 AM