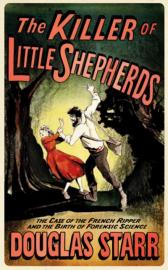 Title: The Killer of Little Shepherds

At the end of the nineteenth century, serial murderer Joseph Vacher, dubbed "The Killer of Little Shepherds," terrorized the French countryside. He eluded authorities for years-until he ran up against prosecutor Emile Fourquet and Dr. Alexandre Lacassagne, the era's most renowned criminologist. The two men typified the Belle Epoque, a period of immense scientific achievement and fascination with its promise to reveal the secrets of the human condition.

With high drama and stunning detail, Douglas Starr recounts the infamous crime and punishment of Vacher, interweaving the story of how Lacassagne and his colleagues developed forensics as we know it. We see one of the earliest uses of criminal profiling, as Fourquet painstakingly collects eyewitness accounts, leading to Vacher's arrest. And we see the twists and turns of the celebrated trial: to disprove Vacher's defense by reason of insanity, Fourquet recruits Lacassagne, who had revolutionized criminal science: refining the use of blood spatter evidence, systematizing the autopsy and doing ground-breaking research in psychology. Lacassagne's forensic investigation ranks among the greatest of all time, and its denouement is gripping.

An important contribution to the history of medicine and criminal justice, impressively researched and thrillingly told.

The Killer of Little Shepherds is a brilliantly written book that covers not just Vacher's crimes, but other interesting cases which saw Laccasagne’s abilities and skills in sovling crimes. It sets the scene with plenty of background, from the explosion of crime rates in France and Europe as Industrial Revolution cut work for unskilled labourers and saw many people out of work with no means of supporting themselves or families.

Starr actually did some pretty extensive research in writing this book and traveled to the remote areas where Vacher's crimes were committed. He also saw many of the exhibits described in the book and spoke with descendants of Dr. Lacassagne.

The book details the advances in the field of Criminal Anthropology as it related to the investigation of Joseph Vacher and other murderers at that time. Lacassangne was Vacher's arch enemy and continued to advance forensics while the police department at the time was full of thugs who beat and tortured their prisoners into a confession to a more scientific based discovery.

It is fascinating to see how the police would accuse a suspect of a crime with absolutely no evidence, while Lacassagne's continued to work on scientific methods that would allow a non-emotional examination of the facts leading to a suspect. The case of Joseph Vacher was Dr. Lacassagne's showcase in his new techniques.

This book would have to be one of the best true crime books I have read to date.
Posted by Scott Wilson at 5:27 PM