BOOK REVIEW: Of Masques and Martyrs 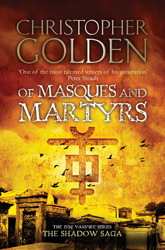 Title: Of Masques and Martyrs

For the Shadows, nothing can ever be the same again. Their existence revealed to the world in Of Saints and Shadows, the truth of their divided heritage revealed to themselves in Angel Souls and Devil Hearts, they must now fight the hardest battle of all -- against others of their own kind. The fragile alliance of human and vampire was shattered forever by Hannibal, among the most ancient of Shadows, who turned on them both in their hour of greatest need. Driven by blood, he thirsts for dominion, and humankind to him will always be prey. For those Shadows who walk a different path there is only one choice to be made. Hannibal must be destroyed before he destroys them all. But his followers are many, and those who oppose him are few...

Of Masques and Martyrs is the third book in the Shadow Saga series by Christopher Golden. Book #3 continues where Book #2 left off. The war between the good vampires versus evil vampires still continues with the same ferocity that it has in the past books. The traditional style vampires have taken over the world and are hunting humans. Prior to this the world used to have sympathy for vampires, but through senseless acts of violence and killing by Hannibal, vampires are hated amongst humans. The actions of the bad vamps makes it harder for the good vampires who want to live peacefully with humans.

This book continues the war with the evil ones with Peter Octavian still the leader of the good vampires. Of Masques And Martyrs has a definitive ending that can see the series end up with enough resolved or continue on with another book or two.
Posted by Scott Wilson at 5:08 PM