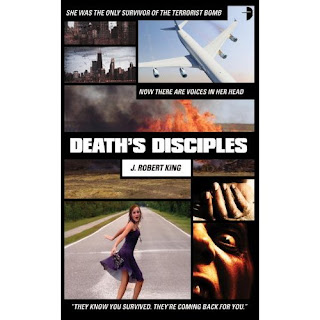 She thought she was dead.

When she woke up in the hospital, she could barely remember getting on the flight, let

alone the terrorist bomb of which she was the only survivor. But she can hear the voices

in her head, for they are the spirits of the dead passengers. They cannot rest until they

have delivered their terrifying message: the terrorists know she survived.

And they’re coming for her!

If you are a Dungeons and Dragons fan, then you will already know of J Robert King’s writing with his TSR novels, The Blood Wars Trilogy set in the Planescape setting, The Double Diamond Triangle series set in the Forgotten Realms setting and the Invasion Cycle Series set in the Magic the Gathering game world.

Death’s Disciples sees King out of the straight fantasy genre and into a work of dark urban fantasy, positioned in a modern day setting. The story is about the sole survivor of Flight 311, a plane that crashed after a terrorist bomb exploded onboard. All of the other passengers, 361 in total, died in this attach by terrorist group “Death’s Disciples”.

The main character wakes in hospital with little memory of the incident, but does hear the voices of the dead passengers, who want her to do things for them. These elements keep the suspense and thrills flowing along at a fast pace with many unexpected turns to surprise the reader.

This is a great read and an excellent novel in a new genre for well established fantasy author King.
Posted by Scott Wilson at 4:26 PM