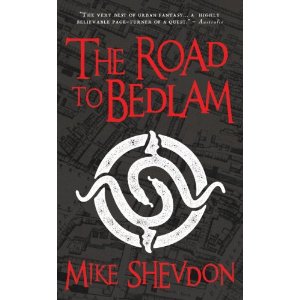 The sequel to Sixty-One Nails.

"THERE'S BEEN AN ACCIDENT. IT'S YOUR DAUGHTER."

But Alex isn't dead. She's been snatched because she came into her magical power early. Her father, Niall Petersen, must use his own wayward magic to track her down and save her from the madness of Bedlam.

Road to Bedlam is the second book in the paranormal series about the lives of fey, humans, and fey/human hybrids. I haven’t yet read Mike Shevdon’s first book in the series, Sixty One Nails, so I’m not sure if this one carries straight on from when the first book ended. I will be looking for a copy of Sixty One Nails now though as I enjoyed Road to Bedlam and need to know the back story to it.

This book sees a father's search for his daughter after her fey abilities start to develop and she abducted by malevolent authorities and declared dead. The father doesn’t believe her to be dead, and struggles to come to terms with it, while continuing his search. Meanwhile, the daughter is subjected to secret medical experiments to cure her of her paranormal abilities.

It’s really the father’s fault as he knows his daughter may inherit the fey abilities, around her present age, and that those abilities would be both terrifying and dangerous to herself and others. He lives in hope it won’t happen and doesn’t tell her, so when she is abducted and experimented on she is at a loss to why.

Look forward to reading both the first book and next book in this series.
Posted by Scott Wilson at 7:41 PM