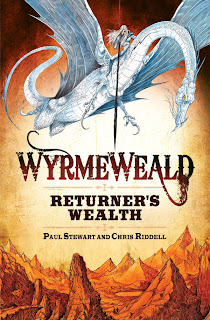 Book One of a new three-part fantasy sequence by Paul Stewart and Chris Riddell set in Wyrmeweald, a Wild-West world where dragon-like beasts roam supreme.

Young pioneer, Micah, enters Wrymeweald full of hope to return home having made his fortune. But this is a land where wyrmes, fabulous dragon-like beasts, roam wild and reign supreme. In Wyrmeweald man is both hunter and hunted – and seventeen-year-old Micah may never return alive, let alone a hero…

After a near-brush with death on the edge of a canyon, Micah soon finds a chance to prove his worth when he meets with Eli, a veteran tracker of Wrymeweald. They choose to defend a rare whitewyrme egg and its precious hatchling before it falls into the hands of a band of evil Kith. But the fledgling wyrme has its own guardian in the shape of the beautiful, brave and dangerous Thrace.

Thrace, a Kin and a highly-skilled wyrme rider-assassin; and Micah, a would-be Kith, should never mix - but the magnetism between them is strong. Together they join forces on a mission to rescue the hatchling and seek vengeance for loved-ones lost at the hand of Kith bandits. Meanwhile the glorious whitewyrme colony of Wyrmeweald looks on as its land is encroached by gold-diggers and ravaged by bounty hunters. Is Exodus the only option? And if so, when - and where - will they flee too?

Paul Stewart and Chris Riddell, the duo behind the hugely popular The Edge Chronicles, return with a new and no less inventive fantasy adventure.

This time they turn their attention to the ever-popular genre of dragon fantasy, though here the creatures are known as 'Wyrmes' and come in a dizzying variety of shapes and sizes. The authors work them into a story that draws as much from Wild West mythology (new frontiers, the conflict between ‘civilisation’ and the wilderness) as it does The Hobbit. The authors have also spoken of how they were inspired by a trip to the Scottish highlands during a book tour, and you can feel the influence in the harsh but beautiful crags and valleys of the Wyrmeweald.

The story moves along at a brisk pace and gives you a good background to the lead characters (both human and Wyrme) and their motivations. The setting is a bleak and hostile environment with arid deserts and harsh seasons. Human hunters prey on the Wyrmes seeking to either snatch their Wyves (the dragon eggs) so that the hatchlings can be trained and raised as their captives for curio show or guard-dog type uses, or to harvest the Wyrme's skins and various body parts for use as clothing or in potions.

It was a mixture of romance, adventure, wyrmes (dragon-like creatures), and a boy called Micah. It was almost like I was standing next to him, watching as whitewrymes flew above us, and carrionwyrmes were picking at dead wyrmekith only a few feet away.

Yes, all the strange names are slightly confusing, but after a while, it all matches, creating an awesome adventure.
Posted by Scott Wilson at 10:20 PM