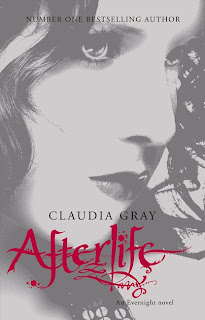 In AFTERLIFE, having become what they feared most, Bianca and Lucas face a scary new reality. They return to Evernight Academy, Lucas as a vampire and Bianca as a wraith. But Lucas is haunted by demons,both personal and supernatural. Bianca must help him fight the evil inside him - and find the power to claim her destiny at last.

In the previous book, Hourglass, the story was left on a real cliff hanger, so it seems like forever since it came out and this last book was released. Hourglass saw Bianca dying and turning into a wraith and Lucas was brutally murdered turned into a vampire by Charity, Balthazar’s psycho vampire sister. There was just too much left unresolved and Evernight was eagerly awaited by us fans who wanted to know what was going to happen.

Afterlife was a thrilling conclusion to the Evernight series. Lucas as a vampire...didn’t go so well. He was suffering so much throughout this book, but he tried so hard to get through it, so he could be with Bianca. It was sweet, yet tragic at the same time. He used to be such a strong character before his transformation, but I think we get to see the more vulnerable side of him in Afterlife. Bianca, as a wraith, was also having a hard time. Trying to control her new powers, trying to understand her whole new existence...nothing was the same. She couldn’t eat or drink like she used to. Her new body felt things differently than before. Pain was different. She had to adapt to a completely new life.
Posted by Scott Wilson at 5:02 AM