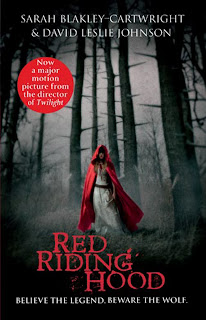 A literary novelisation of the hit Warner Brothers film directed by Catherine Hardwicke.

Valerie is in love with the dangerous and unlikable Peter (a woodcutter, of course) but is betrothed to the rich hot blacksmith in town, Henry.

Their town has been terrorized by a wolf a wolf that appears only at the full moon and when Valerie's sister is brutally murdered the message is clear: she's next.

There has been so much hype about this book and movie lately that it is hard to not know about the story. One of the main issues I’ve seen floating around is that this edition of the book is missing the final chapter (which is now available online from here http://redridinghoodbook.com/RedRidingHood_extrachapter.pdf ). This wasn’t indicated on the blurb or cover of the book, so you don’t know about this until you’ve purchased the book.

Apart from this issue, the book is great. I really enjoyed the retelling of the Little Red Riding Hood fable in a more dark and sinister adult version. The story revolves around a small town that is cursed with the presence of a beast that comes out every full moon. Until the last full moon, the townsfolk were able to keep the beast at bay by leaving an animal sacrifice out for the creature. The last full moon saw a young woman killed by the beast and the townsfolk bring in a priest to get rid of the creature.

There is romance in the book, but also a few extreme death and violent scenes as well. Overall this book was well written and a great read.
Posted by Scott Wilson at 7:16 PM