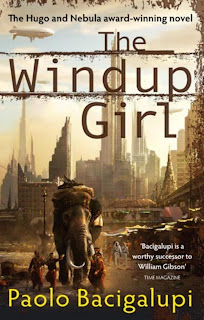 An action-packed adventure and a politically acute commentary on the near-future.

In Thailand, Anderson Lake is a calorie company man working for big business. Under cover as a factory manager, he combs Bangkok's street markets in search of near-extinct foodstuffs. And there he meets the Windup Girl, the beautiful and enigmatic Emiko - now abandoned to the streets. She is one of the underclass of New People, creche-grown and bred to suit the whims of the rich. Engineered as slaves, soldiers and toys, they are seen as soulless by some and as devils by others. As Lake becomes more drawn to Emiko, conspiracies breed within his working life becomes and the politics of a troubled age threaten to spiral out of control. The pressures mount as what he should do conflicts with what he wants to do, threatening to bring down his world.

So what happens when bio-terrorism becomes a tool for corporate profits? And could bio-terrorism's genetic drift force mankind to the cusp of post-human evolution?

Paolo Bacigalupi's writing has been nominated for the Nebula and Hugo awards and his YA novel, SHIP BREAKER, was shortlisted for the National Book Award. He lives in Western Colorado with his wife and son.

The Windup Girl is set in Bangkok in a near future dystopia. The city now houses many displaced Chinese refugees from a Malaysia ruined by fundamentalist muslim fanatics. Bangkok itself is only kept from drowning by engineering and technology.

This is a post-oil world, with very little fuel run technology enduring, and as the petrol moguls kept technology such as solar power off the market in current day, there is not much in the way of alternate power supplies. As a substitute, power is provided by human labour and genetically engineered highly efficient animals pouring kinetic energy into springs, which then can be used to power machines and even computers.

The rapidly mutating diseases caused by genetic engineering meddling and conflict kill many - with mainly the calorie companies having the resources to combat their own hellish offspring, if they care to. Mutated cats with no real predators except humans have also destroyed a lot of the food chain.

The main character is Emiko, a windup girl, a being genetically engineered to serve and please. Emiko is an unwitting participant in a series of sinister plans to destroy Thailand's long-held independence by calorie men. Emiko fights an inner battle to understand what she is, and if she is human or just a created mutant.

This book is quite entertaining and worth a read.
Posted by Scott Wilson at 7:41 PM