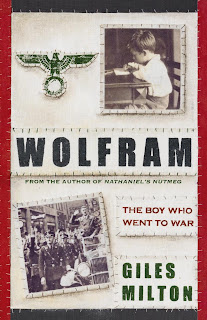 A powerful story of a young man conscripted into Hitler's army and a family left behind.

The fighter bombers appeared from nowhere ... there was no time to think about firing back, nor even to unharness the horses pulling the artillery. Wolfram buried his head in his arms as the opening salvo exploded all around him. The ground shuddered and jolted as heavy weaponry thumped into the soil. It was like a giant fist punching the ground. Explosion after explosion. Thump - thump - thump.

The Allied bombers screamed in from the sea, spilling hundreds of shells onto the troops below. As the air filled with exploding shrapnel, one young German soldier flung himself into a ditch and prayed that his ordeal would soon be over.

Wolfram Aichele was nine years old when Hitler came to power: his formative years were spent in the shadow of the Third Reich. He and his parents - free-thinking artists - were to have first hand experience of living under one of the most brutal regimes in history.

Wolfram: The Boy Who Went to War overturns all the cliches about life under Hitler. It is a powerful story of warfare and human survival and a reminder that civilians on all sides suffered the consequences of Hitler s war. It is also an eloquent testimony to the fact that even in times of exceptional darkness there remains a brilliant spark of humanity that can never be totally extinguished. Wolfram is the father-in-law of best-selling writer, Giles Milton.

Giles Milton is a bestselling writer and journalist and the author of six previous works of non-fiction, two novels and children's books. For more information please visit http://www.gilesmilton.com.

Wolfram is a non-fiction book centred around a young German boy, in a small German town, Pforzheim during the Second World War. Giles Norton’s book follows Wolfram from his childhood to his apprenticeship as a wood carver. Like many other German’s around this time he was conscripted into the German army at eighteen.

Wolfram was later captured by the Allied Forces and spent time as a Prisoner of War. His story is interesting as there were many German’s who were forced into the Hitler’s war, regardless of their views of this dictator. There are accounts of others who suffered during this reign under the Nazi rule, many whom were also conscripted in other roles.

Over the years we have seen recounts of World War Two from the Jews, the Allied Troops, The Nazi’s but this account is quite different. Seeing life during this time for those who did not support Hitler, but nonetheless had little choice but to serve is quite shocking. You don’t really consider all of the victims of war until you see if from everyone’s point of view.
Posted by Scott Wilson at 12:09 AM