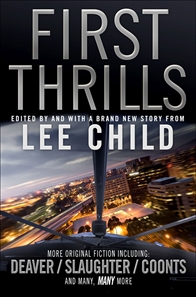 A collection of original, high-octane short stories from some of the biggest names in thrillers.

Number one New York Times bestselling author Lee Child has teamed up with the International Thriller Writers Organization for First Thrills, a showcase of bestselling authors as well as rising stars in the genre.

The stories fit under the most inclusive of thriller umbrellas, but many contain elements of mysteries, science fiction, and horror as well. They feature an equally diverse cast of characters, too, ranging from con men and killers to aliens, ghosts and zombies.

About edited by Lee Child

Lee Child is an international No.1 Bestseller. His Jack Reacher novels have been published in 40 territories. He was born in Coventry, went to school in Sheffield but now lives in Manhattan.

First Thrills is a collection of short stories from a group of well know crime and thriller authors. The latest of these, FIRST THRILLS, is a masterpiece, comprised of 25 stories that each possesses some quality for recommendation. Nicely balanced between well-known authors and those who will be soon, it is a smorgasbord for readers who require an introduction to the thriller genre but are unsure where to begin. Those who are familiar with some of the contributors will enjoy encountering them in a somewhat different context; short fiction, as well as discovering new authors to place on their "must read" lists.

"The Dead Club" by Daniel James Palmer and Michael Palmer is the best bet as wagering on death mirrors real life gambling pools. Other strong entries include "The Thief" by Greg Hurwitz and Ken Bruen's "Wednesday's Child". None of the entries from the veterans or the rookies are bad, but few are excellent. Still fans will enjoy dining with Rip Gerber, Sean Michael Bailey and other newcomers and vets like Stephen Coonts, John Lescroart, Karin Slaughter and Heather Graham as each provides readers with plenty of chills and thrills. John Lescroart's "The Gato Conundrum" is an example. Lescroart, best known for his legal thrillers featuring Dismas Hardy and Abe Glitsky, here taps into his inner Robert Ludlum with a haunting tale of espionage that is complete in less than 20 pages. Lee Child's "The Bodyguard" is not a Jack Reacher story. It's a very clever piece of work, one involving a personal security job that goes bad and gently tugs your expectations one way until you wind up somewhere that is totally unexpected, yet is quite consistent with what has gone before.

And Karin Slaughter? Incapable of disappointing, she takes us far away from the environs of Georgia in "Cold Cold Heart," a grim tale of domestic one-upmanship that is played out between a mismatched couple long after their marriage has ended. 'Til death do they part, indeed.

Last Supper by Rip Gerber is different from her work to date that would best be classified in the techno-thriller genre, there is nothing at all techno, as that term is commonly used, about his contribution. It is instead a smart tale of revenge with an ending you might see coming but that strikes from an unexpected direction.
Posted by Scott Wilson at 9:37 PM