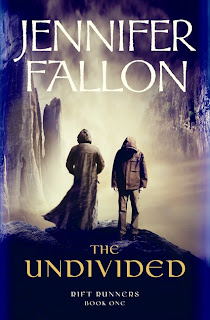 The Undivided are divided.

The psychic twins Rónán and Darragh have been separated by a traitor Druid, Amergin, who has thrown Rónán through a rift into another reality. Now time is running out for Darragh. If Rónán isn′t found soon, they will both die.

Meanwhile, Ren Kavanagh has no notion of where he comes from and is plagued by mysterious injuries. Then he meets the enticing and mysterious Trása, and before he can figure out how it happened, he is in serious trouble ...

Ren′s life is about to become more bizarre and dangerous than he could ever have imagined.

′characters are dynamic and engaging, her plots are intricate and detailed′ Good Reading

′a multi-hued tapestry of myth, deceit and ambition′ Publishers Weekly

The Undivided is the first book I have read by author Jennifer Fallon, and definetly not the last one. I’ve discovered a new favourite author in Fallon, and one that I can only compare to Tolkien if a comparison was to be made.

This book follows the lives of a pair of psychically connected twins, born in an alternate reality where the Romans were beaten back from their conquering rampage of Britain, Ireland, Scotland and Wales. How they were beaten back forms the foundations of this alternate reality. The Undivided are able to channel a power, from the Sidhe to the Druids, which remains while the twins are alive. The story centres on the each of the Undivided twins, Ren in our world, Darragh in the magical celtic world and the political structure of the Sidhe and Druidic struggle for supremacy and control of the Sidhe magic, and the cultural clash between a magic-infused world and a technological, magic-poor world.

This is a brilliant book and I’m glad I’ve discovered a new author who writes a mighty fine tale with fantasy, romance and action.
Posted by Scott Wilson at 5:51 AM