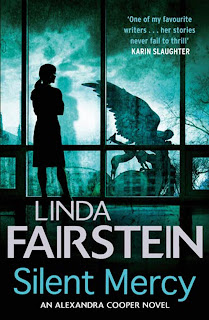 'Sex crimes, torture, hate - it's got Alex Cooper written all over it.'

When the burnt headless body of a young woman is found on the steps of a Baptist Church in Harlem, Assistant DA Alexandra Cooper is one of the first on the shocking scene. Alex has seen some gruesome crimes committed in New York, but the barbarity of this latest discovery leaves her nauseous.

With NYPD cop Mike Chapman, Alex begins to investigate, but before long another woman is slaughtered and found on the steps of a Catholic church in Little Italy; her throat slashed and her tongue cut out.

It becomes clear there is a zealous serial killer on the loose. Now Alex and Mike must keep one step ahead of a religious fanatic bent on silencing the women he believes are bringing shame to his beliefs - before he kills anyone else.

For three decades, Linda Fairstein served in the office of the New York County District Attorney, where she was Chief of the Sex Crimes Prosecution Unit. In 2010 she was presented with the Silver Bullet Award from the International Thriller Writers.

Silent Mercy is the is the thirteenth book in the Crime series by Linda Fairstein. Prosecutor Alexandra Cooper, or Coop as she’s known, of the New York's District Attorney's Office becomes involved in crimes that may have their origins in religious or female bias. Silent Mercy is set in Manhattan and revolves around its old religious institutions.

A young woman is found murdered on the steps of Mount Neboh Baptist Church. She has not only been murdered but decapitated, and her head is missing. Not long after her head is discovered at St. John the Devine Church. The situation does not get any better when another woman's body is found on the steps of St. Patrick's Cathedral.

Coop with the help of Detective Mike Chapman begin to look into the case and find that there may be a link in that both women were very strong in their beliefs in the role of women in religious affairs. n fact, one of the women was an ordained Catholic priest who had been excommunicated.

Coop and Mike break all the rules in running down the murderer. The conclusion takes place in a deserted island in Buzzards Bay called Penikese Island. The island was once the home for delinquent boys and a leper colony.

This book is a great read.
Posted by Scott Wilson at 8:07 PM