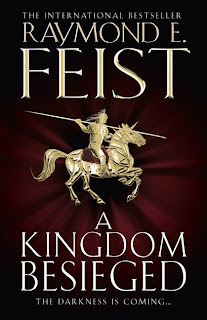 The Darkness is coming ...

The Kingdom is plagued by rumour and instability. Kingdom spies in Kesh have been disappearing -- either murdered, or turned to the enemy side. Information has become scant and unreliable; but one thing appears clear. Dark forces are on the move ...

Since Pug and the Conclave of Shadows enforced peace after the last Keshian invasion, the Empire has offered no threat. But now factions are rising and Jim Dasher reports mobilizations of large forces in the Keshian Confederacy.

As the men of the West answer the King′s call to muster, Martin conDoin -- left as caretaker of Crydee Keep -- will suddenly be confronted with the vanguard of an invading army. He reminds himself that he is a year older than his legendary ancestor, Prince Arutha, was when he stood firm against the Tsurani invasion, but Arutha had an army to command, and Martin is left with old men and young boys.

Massive events are about to unfold, events which threaten the future of all human life in Midkemia ...

A Kingdom Besieged is the latest book in the long-running Riftwar Cycle by Raymond Feist and the first in what appears may be the final trilogy of the story. Depending a bit on how one chooses to count, this is the 19th book in the primary series (which is subdivided into a variety of sagas), with an additional 9 related books (6 co-authored) retroactively filling in story gaps with alternate tales and points of view. Broadly speaking the primary series has generally declined in quality through time, with the first books being the best and the later books the worst. Happily, A Kingdom Besieged goes a long way to reversing this trend, as it is easily better than all eight books making up the last three sagas, and at times almost recapturing the magic of the first few tales


A Kingdom Besieged begins about five years after the end of the previous book, At the Gates of Darkness and has some old and some new characters. If you have enjoyed the Riftwar series by Feist then you will enjoy this next instalment in the continuing saga.
Posted by Scott Wilson at 5:35 AM