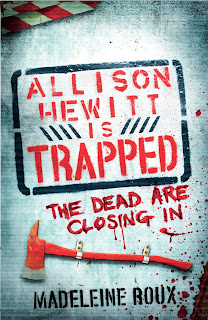 This brilliant debut novel from Madeleine Roux orginated online as the popular blog ALLISON HEWITT IS TRAPPED on http://helptheyarecoming.wordpress.com.

Allison Hewitt is trapped. In the storeroom of Brookes & Peabody's. In a world swarming with the Undead, the Doomed, the Infected.

Locked away with an oddball collection of colleagues and under siege, Allison takes advantage of a surviving internet connection and blogs. She writes, as the food runs out and panic sets in, as relationships develop and friends die, and as zombies claw at the door, all in the hope of connecting with other survivors out there. But as she reads the replies to her posts, Allison begins to comprehend the horrifying scale of the damage. And when no one comes to the group's rescue, they are forced to leave the safety of their room and risk a journey across the city; streets that crawl with zombies, and worse - fellow humans competing for survival.

Madeleine Roux works in a college bookstore in Beloit, Wisconsin. ALLISON HEWITT IS TRAPPED is her first novel.

Allison is Trapped started off online as a blog format story about the survivor of a zombie apocalypse and became so popular it eventually became published in its current format. Bucking the trend of most zombie novels, this is written by a female author, Madelieine Roux. Like Married with Zombies, the outlook and style of the story is very refreshing and quite original.

The book is published, pretty much as it was on her blog, with blog comments made by real people who left them as she posted her story regularly. Roux writes a great protagonist in Allison, who is strong and believable and makes the story easy to get drawn into. Both sharp witted and sharp with an axe, Allison had the whole package and proved to be a true survivor.

While other characters weren’t as much a part of the plot, you really felt a tear well up when they met their untimely demise. I hope Roux writes a couple of more novels along the same lines as this one as it was one of the best zombie apocalypse books I’ve read.
Posted by Scott Wilson at 9:17 PM