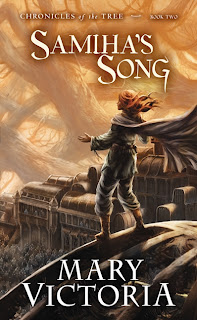 Tymon leaves his new home and his beloved Samiha to complete his Grafting studies with the famous Oracle of Nur. But Tymon and fellow traveller Jedda find that locating the Oracle in a corrupt and lawless city run by pirates and slave-drivers is no easy matter.

Samiha′s fate has been predicted by Grafters down the ages. When she is captured in Cherk Harbour and charged with grand heresy, there seems to be no way out ... but Tymon does not believe in fate and is desperate to save her lift.

As chaos hums through the Tree, survival revolves on the fate of just one ...

I started reading this book without knowing that it was the sequel to Tymon’s Flight. Not sure how I missed this fact, but about fifty pages into it I was thinking that I was missing something as there seemed to be a bit of backstory that I didn’t quite get. That being said, I continued to read as the author writes in a smooth and easy to read manner.

This fantasy story contains some well developed characters and plot and some pretty deep and heavy philosophy for those who like this additional level of depth in their stories. I found the religious elements of this novel to be quite as intense as the philosophy and imbedded in the storyline.

The setting of the story is one of its most unique aspects, as the story takes place in a giant tree. Having a world setting in a tree is quite interesting and at times a bit hard to comprehend, but with the originality and vivid descriptions, it is well written nevertheless.

To the people that live upon and within its boughs, the Tree is all there is. Their culture and society are built around the tree's life cycle, their religion revolves around concepts such as "the Sap," and the lingo is marked by sayings such as "green grace!" Entire cities are built on various boughs and outcroppings, and the possibility of life existing outside the domains of the two main canopies is dismissed as a legend.
Posted by Scott Wilson at 4:51 AM