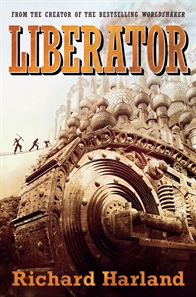 This brilliant sequel to Worldshaker follows the changed fortunes of Col and Riff as the juggernaut rolls on. Now the Filthies are in charge, and it's the Upper Decks people who are victimised and reduced to a ghetto-like existence.

The battle continues as the Filthies take over the juggernaut Worldshaker and rename it Liberator. A world of deception and betrayal ensues as the revolution turns radical. With Col now in the minority with his Swank friends, what will happen to his relationship with Riff, as they both face the reality of a world changing its shape forever?

'Harland has constructed a world with overtones of the Victorian era, when capitalism was at its most aggressive, and taken us hopefully to a brighter dawn.' Viewpoint

'Harland has created a wonderfully brooding world that is part Dickens, part steam-punk and will appeal to those twelve and up who like their fantasy a little on the dark side.' Readings Monthly

Richard Harland was born in Huddersfield, England, and migrated to Australia in 1970. After several years as a singer, songwriter and poet, he became a lecturer in English at the University of Wollongong. He resigned to become a full-time writer in 1997. He now lives in Figtree, eighty kilometres south of Sydney.

His first book was the comic horror novel The Vicar of Morbing Vyle, which has since become a cult classic. In 1997 he began the Eddon and Vail series, which combines a science fiction world with detective thriller stories: The Dark Edge, Taken By Force and Hidden From View. Since then he has published a number of fantasy novels for younger readers, horror fiction and SF short stories, two of which won Aurealis awards. Worldshaker was his first novel with Allen and Unwin.

Liberator by Richard Harland is the sequel to Worldshaker and in the steampunk genre of writing. Col and Riff continue doing battle as rebellion continues within the Liberator and beyond as the other Imperialist juggernauts suspicion about life on Liberator threatens their empires too.

Harland’s characters are quite entertaining and we get to understand the alternate universe he has created a bit more in this sequel.

I really enjoyed this book.
Posted by Scott Wilson at 8:27 PM