BOOK REVIEW: All The Time In The World 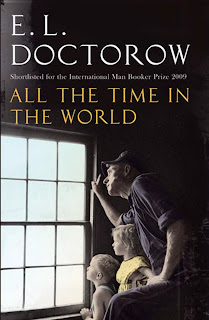 Title: All The Time In The World

An astonishing book of short fiction by one of America's finest writers, the author of The March, Ragtime, and Homer & Langley.

A wedge is driven between a husband and wife when a mysterious stranger arrives, claiming to have grown up in their home. After agreeing to marry a beautiful, headstrong Russian immigrant in exchange for a promotion, a bus boy turned waiter finds himself entangled in a web of organised crime. A strange confluence of circumstances at the end of an ordinary workday causes a man to go off the grid, living off what he can forage in the same affluent suburb where he once lived comfortably with his family. These and the other mesmerising works of short fiction in this collection are resonant with the mystery, tension, beauty, and insight that distinguish E. L. Doctorow's novels. Containing six new stories that have never appeared in book form, and a selection of previous Doctorow classics, All the Time in the World affords us another opportunity to savor the genius of this American master.

E L Doctorow s work is published in thirty languages. Among his honours are the National Book Award, the National Book Critics Circle Award (twice), the PEN/Faulkner Award and the presidentially conferred National Humanities Medal. He lives and works in New York.

E.L.Doctorow is well known in the publishing industry for both the long and short forms of writing and across a range of styles and genres. This collection of stories is no exception to this reputation. The theme of the stories revolves around troubled individuals struggling to make sense of their lives in a society that exalts individualism over community.

Here we find a collection of both male and female protagonists spanning across one hundred and fifty years in America. The current collection contains six stories that appeared either in Sweet Land Stories or in Lives of the Poets. The four remaining six stories, including one later adapted for his novel City of God, were first published in The New Yorker.
Posted by Scott Wilson at 8:17 PM