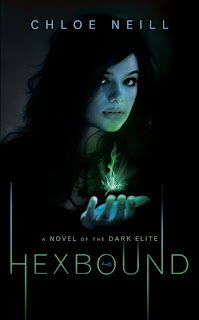 Forget the House of Night, it's time to join the Dark Elite...

They say absolute power corrupts absolutely. But it turns out even a little bit of magic can turn you to the dark side. That's why Lily has to learn how to control her newly discovered abilities and quickly, on top of avoiding the snobs who think they run her school, nursing a crush on a cute sophomore with a big, werewolfy secret and fighting the good fight with her best friend Scout as they take on Chicago's nastiest nightlife - including the tainted magic users known as the Reapers.

All that's even before Lily's invited to a private meeting with Sebastian. He's hot, he's powerful and he's offering to help her harness the magic flowing through her veins in a way that no one else can. He's also a Reaper. Lily can't help but be suspicious of his offer. But she also needs his help. It seems that the line between good and evil isn't quite so clear as she thought...

Chloe Neill was born in the south of the USA and currently resides in the US Midwest. SOME GIRLS BITE is her debut novel and the first in the Chicagoland Vampires series.

Firespell is the second novel in the Dark Elite, young adult fantasy series. We see Lily's training in the paranormal continue as she learns more secrets, particularly about her parents and her abilities. She is also is caught up in some sort of otherworldly territory war.

Lily Parker is back to searching the underground of Chi Town with her magical powered friends. During one of their nightly patrols, they stumble upon some strange vampire like creatures and their slimy trail. After nearly dying, Lily and her friends are hell bent discovering what the reapers are up to, and why they are creating hybrids.

I find Neill’s paranormal YA books to be original and extremely fast paced. I can’t wait for the next book in this series.
Posted by Scott Wilson at 10:19 PM