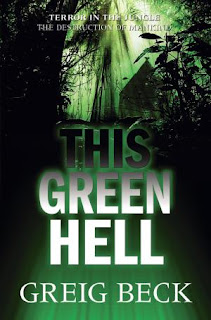 Deep in the steaming jungles of Paraguay, Dr Aimee Weir is in trouble.

The petro biologist has found what she was looking for – a unique microorganism in a natural gas deposit – but it proves to be more destructive than anyone could have imagined. A contagion is striking down all in its wake. The camp is quarantined, but workers start to vanish in the night.

Is it fear of contamination – or has something far more lethal surfaced?

Alex Hunter – code name Arcadian – and his Hot zone All-Forces Warfare Commandos must be dropped in to the disaster area to do whatever it takes to stem the outbreak. It has been a year since Aimee has seen Alex; she thought she had left him for good. Now she needs him more than ever.

In the sweltering jungles of South America, the Arcadian must learn to master his violent inner demons for this rescue mission to have any chance of success. But can he survive long enough to confront the danger that threatens the very survival of mankind?

Greig Beck grew up across the road from Bondi Beach in Sydney, Australia. His early days were spent surfing, sun baking and reading science fiction on the sand. He then went on to study computer science, immerse himself in the financial software industry and later received an MBA. Greig is the director of a software company but still finds time to write and surf. He lives in Vaucluse, Sydney with his wife, son and an enormous black German shepherd.

This Green Hell is Greig's third novel, and he is currently working on his fourth.

This Green Hell is the third book by author Greig Beck, but the first one I’ve read by him. Always a real treat to pick up a book by an author you haven’t heard of before and read with no preconceived ideas about the writing style or formula of writing. It’s even more of a treat when you find a new author to add to your favourite list, as I’ve done with Greig Beck.

This Green Hell is set in South America, Paraguay. We are given a background to the setting with the Jesuit missionaries around the late 1600’s and the disappearance of these people. The story then shoots back to present day where an expedition of scientists have discovered a new micro-organism that may just be the alternate to gas. Unfortunately, the discovery has catastrophic results, infecting any human or animal that comes in contact with it.

This is where the action really begins with the introduction of the rescue team, with all of their high tech weapons and scientific methods.

Overall, the plot was excellent and fast paced. The characters were well developed and crafted, as was the dialogue.
Posted by Scott Wilson at 1:17 AM