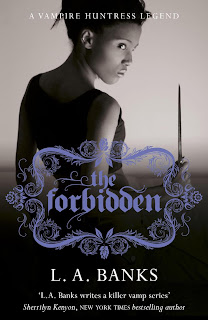 The devil is a dead-beat dad and his consort Lilith couldn't care less. A stolen embryo stirs in Lilith's womb and a plan pulses through her veins: To unleash her child from the gates of hell - as soon as she destroys the only two vampire hunters who can possibly stop her...

Damali Richards is a woman-child in a world running with blood, depravity and demons. Turned by her lover, Carlos Rivera and brought back again, Damali clings to the one measure of purity that was handed down to her through generations of the wise, gifted and strong.

Now, through the power of magic, Damali is on a journey from the streets of Philadelphia to the ancient earth of Africa. With a small army, with Carlos and with her own mad skills, she might just save the world from the demon seductress who wants her and her faith obliterated - before Armageddon begins...

The Forbidden is the fifth book in L.A.Banks’ Vampire Huntress series. In The Forbidden, the battle of good and evil continues, picking up where the last novel, The Bitten, left off. The civil war between Damali, Carlos, Damali's Guardian squad, and the Vampire kingdom has just ended. The results brought, much chaos and many fatalities. The team is battle-weary and seeking refuge.

An untimely dilemma between Damali and Carlos has formed a falling out, and they must be chastened. Damali is alienated from her team and summoned to the council of Neteru Queens. A perplexed Carlos is hidden from the Darkside and summoned to a council of Elders. Damali is stripped of a number of powers, Carlos is tripping on his ego, the Guardian team must step it up a notch, and time is running out. Damali and Carlos must be prepared to fulfill their destinies.

In this book, we learn much more about the history of the religion, what happened with true characters such as Adam and Eve, among others, and what role each of the Guardians will play in the final battle. I’m not sure how many books Banks plans to write in this series, but I’m sure there are many more to continue the fantastic story for a few years to come.
Posted by Scott Wilson at 10:05 PM