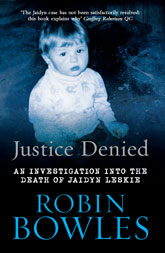 The Victoria Police did not want this book written. Read it and learn why.

In country Victoria, on the night of 14 June 1997, sleeping toddler Jaidyn Leskie is left alone in the front room at his babysitter’s house, while the babysitter goes to collect Jaidyn’s mother from a party several kilometres away.

When the mother and babysitter return to the house they find all the front windows smashed, and a gruesome calling card – a severed pig’s head – staring up from the front garden bed. The child has vanished.

The Melbourne Homicide Squad arrives early the following day and quickly eliminates the involvement of any member of the ‘pig’s head team’ in Jaidyn’s disappearance. The police decide the babysitter, Greg Domaszewicz, is the prime suspect.Within four weeks, Domaszewicz was arrested and charged. He was later tried and eventually acquitted of murdering Jaidyn. Case closed? Not quite!

If you think you know everything there is to know about this incredible story, think again.

With exclusive interviews and evidence placed in the public domain for the first time, Justice Denied is the definitive story of how a $3 million police investigation failed. The first edition of this book caused widespread debate, upset many police and caused the state coroner to announce he would hold an inquest into Jaidyn’s death.Three inquests and ten years later the law is no closer to an arrest of the murderer of little Jaidyn Leskie.

Robin Bowles, best-selling author of Blind Justice, Dead Centre and other true crime sagas, writes a tense, tightly woven detective thriller. The conclusions she reaches about the death of Jaidyn Leskie will have you questioning the state of our justice system.

"Robin Bowles raises severe doubts regarding the investigation into the disappearance and death of Jaidyn Leskie. The police are as much on trial in this case as those who were charged with the crime" Professor Paul Wilson, Criminologist, Bond University, Queensland

The unsolved mystery of the disappearance of toddler Jaidyn Leskie was across the nation’s news for months, with various views and opinions on exactly what happened and who was involved.

This book covers the police investigation and subsequent media coverage of the events in great detail, shedding light on some of the critical events that were involved in the investigation resulting in the case remaining unsolved.

If you already have an opinion on if the babysitter was guilty or not, then read this book to see the additional information that you probably haven’t heard in the media.
Posted by Scott Wilson at 3:39 AM