BOOK REVIEW: I Don’t Want To Kill You 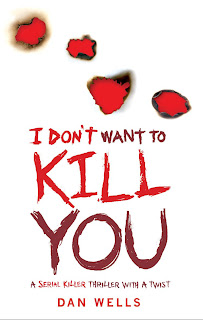 Title: I Don’t Want To Kill You

Dexter meets The X Files - fans of the dark and supernatural will love this.

Sixteen-year-old John Wayne Cleaver has always known he's different, but not because he only has one friend (and doesn't much like him) and not because he regularly helps out in his mother's mortuary. He's different because he recognizes the classic signs of an incipient serial killer in his own personality, and he's created a rigid set of rules to follow to keep his darker nature, the one he calls Mr Monster in check.

But John discovers it's the personality traits he so fears that put him in the best position to save the people of his town from a series of horrific and disturbing killers...

Dan Wells has a Bachelors in English from Brigham Young University where he was the editor at The Leading Edge magazine. He now runs http://www.timewastersguide.com.

I Don’t Want to Kill You is the third book in the crime series by Dan Well’s, continuing the story of a disturbed teen with characteristics of a serial killer, John Cleaver. Cleaver is obessed with serial killers and reads and studies everything he can about their methods, psychology and what drives them. Not a healthy habit for someone who knows that they may very well end up being like the character Dexter.

In I Don’t Want to Kill You, Cleaver is tracking a serial killer who is in the city solely because of a challenge he has issued. The story unravels from here and continues in the same vein as the previous books, fast paced and full of twists and turns.

This is a great book and I hope Dan Wells continues this series for many books to come.
Posted by Scott Wilson at 5:58 PM