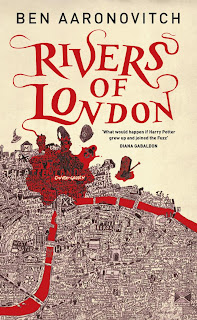 Author:              Peter Grant
Publisher:          Gollancz
RRP:                   $32.99
ISBN:                  9780575097575
Release Date:    April 2011
Pages:                400
Description:
CSI London, Urban Fantasy-style!
Peter Grant was just a probationary constable in the Metropolitan Police Service when one night, in pursuance of a murder inquiry, he tried to take a witness statement from someone who was dead but disturbingly voluble, thus bringing him to the attention of Inspector Nightingale, the last wizard in England.
Now Peter is a Detective Constable and a trainee wizard, the first apprentice in fifty years and his world has become somewhat more complicated: nests of vampires in Purley, negotiating a truce between the warring god and goddess of the Thames, digging up graves in Covent Garden and there's something festering at the heart of London, a malicious vengeful spirit that takes ordinary Londoners and twists them into grotesque mannequins to act out its drama of violence and despair. The spirit of riot and rebellion has awakened in the city and it falls to Peter to bring order out of chaos - or die trying.
About the Author
Ben Aaronovitch's work reflects his abiding fascination and love for what he modestly likes to refer to as the 'Capital of the World', where he was born and raised. He works as a London bookseller when he is not writing novels and TV scripts.
Review:
Ben Aaronovitch’s urban fantasy, Rivers of London break the mould of the genre, being a rather humourous, tongue in cheek police driven form that the usual romance driven paranormal story. Set in London, this story has some great action scenes and descriptions of Great Britain.
The main character here joins the London Metropolitan Police and is quickly recruited to the rather unusual division where he becomes an apprentice wizard. I can’t help but find myself comparing the author to Ben Elton and Douglas Adams. The story has the same sort of feel and rhytym to it as novels by those two great authors. Most of all though there is an intriguing crime story which involves ghosts, and other interesting extraordinary matters such as dealing with a nest of vampires or settling scores between Father Thames and Mother Thames, (where the other rivers have become involved as well).
Can’t wait to read the next two books in this series, which I’ve heard are soon to be released in Australia.
Posted by Scott Wilson at 9:23 PM