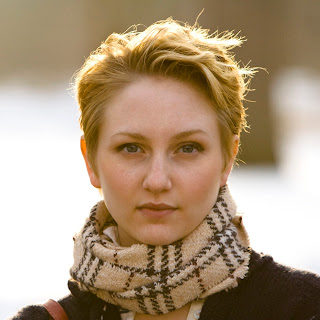 Scott: Thank you so much taking the time to chat with us here at The Fringe magazine. I’ve recently finished reading your latest novel Allison Hewitt is Trapped and thoroughly enjoyed it. How has it been received it the market to date?


Madeleine: So far so good! It's been an absolute joy seeing the responses and hearing what all of the readers have to say.

Scott: What inspired you to start writing Allison Hewitt is Trapped as a blog?

Madeleine: I wanted to push myself to try something new. When you're updating something on a regular basis there's an urgency, a sense that you can't get lazy and let the story lie around untouched for a few days. You have to satisfy your readers or you'll lose their interest. I liked having that constant drive, and then when the comments started coming that added a new interactive element that I'd never experienced before.

Scott: I’ve seen a few self published zombie novels start as blogs and become successful, published books. What do you think it is about the zombie genre that makes it a popular way to start off writing?

Madeleine: That's a good question, and I'm not quite sure what the reason is. For me it was the appeal of putting ordinary people into an extraordinary situation and watching them learn to adapt. Zombies can represent whatever you want them to, and I appreciate that they give a constant feeling of menace to a story. They're always a background threat, and I like having that there while I introduce other sources of conflict. It lends a palpable sense of unpredictability.

Scott: Do you have a sequel lined up for Allison Hewitt or do you plan on writing a non-zombie book next?

Madeleine: Yes! The sequel is called Sadie Walker Is Stranded. It's in the same universe, but follows a new set of survivors in a very different set of survival parameters.

Madeleine: It depends. In periods of high productivity I'll get intensely focused and write ten to fifteen pages a day. Sometimes I need to recharge and step away from the computer. On more average days I try to get at least five pages done, sometimes less and sometimes more.

Madeleine: I've been writing since before I can remember. My parents have all sorts of embarrassing little booklets I made filled with scribblings and illustrations. I was never great at science or math so I poured my energy into creative outlets. My family always stressed reading, and my Mom had me reading Jane Austen from a problematically young age. I'm sure that influenced my sense of feminism and romance in all sorts of interesting ways. It was short fiction to start, but I started honing my longer work in the last three or four years. I had a short story published in a great Wisconsin magazine called Rosebud. I did the barrage method of sending my work to anyone who would look at it. That didn't necessarily pan out so well for the short fiction, but it was good practice.

Madeleine: I tend to form a central character first, then the world or premise and the other characters. I'll take a lot of notes, just whatever springs to mind, and start immersing myself in anything that might help inspire or inform the story. Usually I'll let the idea percolate for a few weeks, to see if I'm still taken with the whole thing after reflection. By that time I'll have pages and pages of notes and I sit down to do a rough outline. Then I just start from the beginning, getting as much out as I can. I go back and add or subtract later if there are missing elements.

Madeleine: I'm on A Clash of Kings by George RR Martin at the moment after about ten different friends berated me for not having finished the Song of Ice and Fire series. I've also got A Sorcerer and a Gentleman by Elizabeth Willey and Mists of Avalon by Marion Zimmer Bradley on my night stand. It's inefficient, but I hover between a few books at a time.

Madeleine: Research. Read successful query letters. Be confident and professional. Agents are angels. Get one. They help iron out the entire process. I wouldn't have gotten far without Kate McKean, my agent. She's helped with every step and really helped with the anxieties of the industry. Find someone you respect and can laugh with. Also, never be afraid to stand up for yourself or your ideas. If you think your story has merit, fight for it.

Madeleine: I hope dead people are eligible or this is going to get weird fast.

Neil Gaiman, because I bet he can make tea out of anything; Lord Byron, because look at him; George RR Martin, because I want to know the end of the Song of Ice and Fire series and he seems fond of mead; Jane Austen, for obvious reasons; and Oscar Wilde, because every writer with half a brain wants to be best buds with Oscar.

Thanks for the good questions, Scott. It was my pleasure.
Posted by Scott Wilson at 1:29 AM