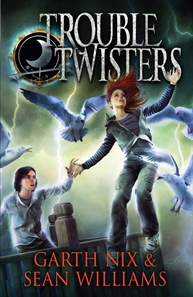 The first book of a major fantasy series from New York Times bestselling authors Garth Nix and Sean Williams, in which twins find that they must act as wards against a threatening evil.

'Come to us, Troubletwisters, join us ... welcome, most welcome!'

When their home mysteriously explodes around their ears, twins Jack and Jaide are sent to stay with a grandmother they have never met, in a town they have never heard of. Portland might seem boring and quiet, but it soon becomes apparent that Grandma X is more than a little eccentric, and there are very strange happenings in the town. Talking cats, swarms of cockroaches, a miniature tornado trashing their room - the twins are about to find out what it means to be a troubletwister!

About Garth Nix and Sean Williams

Garth Nix is best known for his award-winning fantasies Sabriel, Lirael and Abhorsen and the seven books of the Keys to the Kingdom series. His books have appeared on the bestseller lists of the New York Times, Publishers Weekly, the Guardian, the Sunday Times and the Australian. Garth lives in Sydney with his wife and two sons.

Sean Williams is best known for his award-winning space opera series and is the number-one New York Times-best-selling author of Star Wars: The Force Unleashed. He is also the author of the Broken Land trilogy for young adults and the Books of the Change. Sean lives in Adelaide with his wife and family.

Troubletwisters is the first in a new series by authors Garth Nix and Sean Williams. The book will appeal to YA fantasy addicts, such as fans of Suzanne Collins' Gregor the Overlander series. Troubletwister is a enjoyable read about twins Jack and Jaide as they embark on a journey that changes their lives. Forced to go live with their Grandma after their house is ruined and that’s where the story really gets going. They two characters are just fantastic, they are very likeable. They are very swift in their instincts and soon realise that there is something about Grandma X and they are resolute to find out what. Jaide is the more outgoing type always trying to get Jack to explore when they know they shouldn't.

This is one great first book in a series that I can see being very popular with the YA market.
Posted by Scott Wilson at 8:15 PM